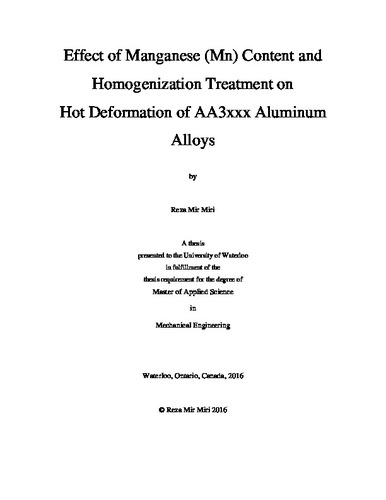 In the current study the effect of Mn content and homogenization heat treatment on the hot deformation behavior of AA3XXX aluminum alloy was investigated. Three Mn contents of 0.05, 0.29 and 1.04 wt.% were considered. These alloys were subjected to a single-step heat treatment (H1), two two-steps heat treatments (H2 and H3) cycles. Electrical conductivity measurements were applied on as-cast alloys and after three homogenization treatments in order to evaluate the Mn content in the solid solution on the AA3XXX aluminum alloys. Hot deformation of the alloys was conducted using Gleeble 3500 machine, under plane strain conditions up to a final strain of 0.5. The deformation strain rate was selected as 0.1, 1.0 and 10 s-1, and deformation temperature was ranged between 300-500°C with 100°C temperature steps. Using the flow curves obtained from the Gleeble tests, the constitutive behavior of the materials was developed. Moreover, dislocation density and stored energy after hot deformation of AA3XXX aluminum alloys were calculated. The deformed materials were characterized using optical microscopy and image analyzing software to measure as-cast area fraction of the constituent particles and the size and aspect ratio of the constituent particles before and after hot deformation. Recovery model is able to capture the softening behavior of the Al-1%Mn alloy that has a close chemical composition to an alloy with 0.05 wt% Mn.