The Characterization of Graphene Paper for Flexible Electronics Application 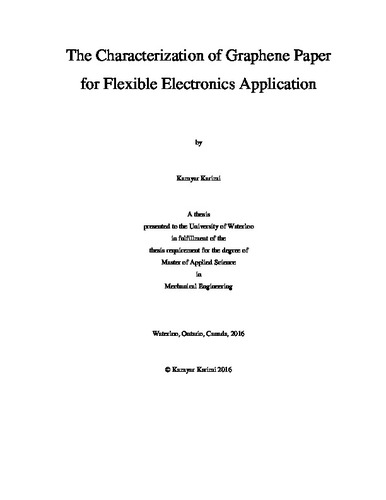 Graphene has been gaining attention mainly because of its exceptional electrical and mechanical properties. Mono layer graphene with its planar hexagonal lattice structure is transparent and flexible. Together with its high electrical conductivity, this form of graphene can be an excellent material for flexible electronics. However, structural defects and lattice disorders have been the primary reasons for its inability to fulfill its full potential. As a result, other graphene based structures have been developed faster - one of the most important of which is graphene paper. Graphene paper is a hierarchical structure the building block of which is graphene nano platelets. The objectives of the study were to synthesize high quality graphene powder, and to prepare stable ink to fabricate graphene paper samples for electrical and mechanical characterization. Two types of tests were conducted to determine: (i) electrical resistance; and (ii) mechanical properties, specifically fatigue bending and adhesion. Experimental data were analyzed using standard statistical modeling techniques. In this work, high quality graphene powder was first produced using liquid phase exfoliation. Then, stable graphene ink was developed to produce large scale graphene paper depositions on polyimide Kapton substrates. A large set of graphene paper samples was prepared with different ink concentration and annealed at a temperature range between 280 oC and 320 oC for periods for up to 24 hours. The sheet resistance of the prepared graphene paper were measured using a custom built electrical fixture. The electrical measurement experiments indicated that the electrical resistance of graphene paper samples is mainly a function of annealing temperature, annealing time and concentration of the as-prepared ink. A set of fatigue bending and adhesion tests was conducted to ensure that the material is mechanically durable such that the electrical resistance does not change after repeated bending loads. It was found that the material structure gets mechanically weaker as the annealing time increases. Prolonged annealing for periods longer than 8 hours at 300 oC degrades the mechanical properties of this specific graphene paper. Finally, capacitance properties of the produced graphene paper were investigated. To simulate double layer capacitance behaviour, electrodes were fabricated with graphene paper coating and used for cyclic voltammetry setup. It was found that the material does not exhibit ideal double layer behaviour due to its low porosity.