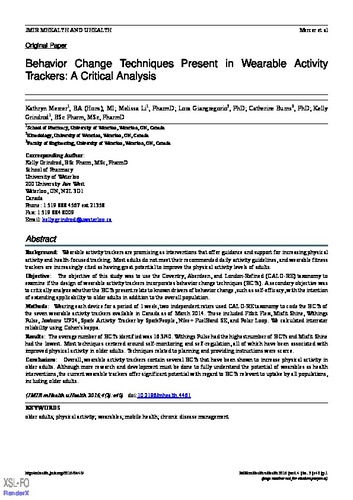 Background: Wearable activity trackers are promising as interventions that offer guidance and support for increasing physical activity and health-focused tracking. Most adults do not meet their recommended daily activity guidelines, and wearable fitness trackers are increasingly cited as having great potential to improve the physical activity levels of adults. Objective: The objective of this study was to use the Coventry, Aberdeen, and London-Refined (CALO-RE) taxonomy to examine if the design of wearable activity trackers incorporates behavior change techniques (BCTs). A secondary objective was to critically analyze whether the BCTs present relate to known drivers of behavior change, such as self-efficacy, with the intention of extending applicability to older adults in addition to the overall population. Methods: Wearing each device for a period of 1 week, two independent raters used CALO-RE taxonomy to code the BCTs of the seven wearable activity trackers available in Canada as of March 2014. These included Fitbit Flex, Misfit Shine, Withings Pulse, Jawbone UP24, Spark Activity Tracker by SparkPeople, Nike+ FuelBand SE, and Polar Loop. We calculated interrater reliability using Cohen's kappa. Results: The average number of BCTs identified was 16.3/40. Withings Pulse had the highest number of BCTs and Misfit Shine had the lowest. Most techniques centered around self-monitoring and self-regulation, all of which have been associated with improved physical activity in older adults. Techniques related to planning and providing instructions were scarce. Conclusions: Overall, wearable activity trackers contain several BCTs that have been shown to increase physical activity in older adults. Although more research and development must be done to fully understand the potential of wearables as health interventions, the current wearable trackers offer significant potential with regard to BCTs relevant to uptake by all populations, including older adults.