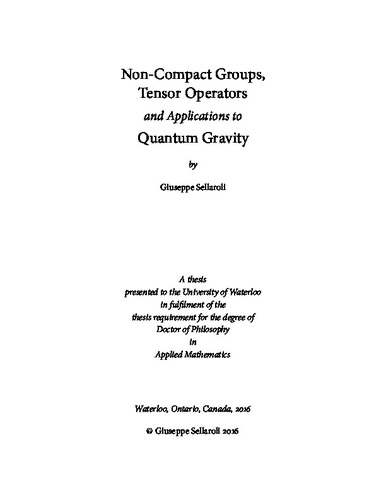 This work focuses on non-compact groups and their applications to quantum gravity, mainly through the use of tensor operators. Non-compact groups appear naturally if the space-time is of Lorentzian signature, but can also have an important role in the Euclidean case, as will be shown. First, the mathematical theory of tensor operators for a Lie group is recast in a new way which is used to generalise the Wigner–Eckart theorem to non-compact groups. The result relies on the knowledge of the recoupling theory between finite-dimensional and infinite-dimensional irreducible representations of the group; here the previously unconsidered cases of the 3D and 4D Lorentz groups are investigated in detail. As an application, the Wigner–Eckart theorem is used to generalise the Jordan–Schwinger representation of SU(2) to both groups, for all representation classes. Next, the results obtained for the 3D Lorentz group are applied to (2+1) Lorentzian loop quantum gravity to develop an analogue of the well-known spinorial approach used in the Euclidean case. Tensor operators are used to construct observables and to generalise the Hamiltonian constraint introduced by Bonzom and Livine (2012) for 3D gravity to the Lorentzian case. The Ponzano–Regge amplitude is shown to be a solution of this constraint by recovering the (opportunely generalised) Biedenharn–Elliott relations. Finally, the focus is shifted on the intertwiner space based on SU(2) representations, widely used in loop quantum gravity. When working in the spinorial formalism, it has been shown that the Hilbert space of n-valent intertwiners with fixed total area is a representation of U(n). Here it is shown that the full space of all n-valent intertwiners forms an irreducible representation of the non-compact group SO*(2n). This fact is used to construct a new kind of coherent intertwiner state (in the sense of Perelomov). Although some of these states were known already, the majority of them was not until now; moreover, the underlying group structure was completely unknown. Hints of how these coherent states can be interpreted in the semi-classical limit as convex polyhedra are provided.