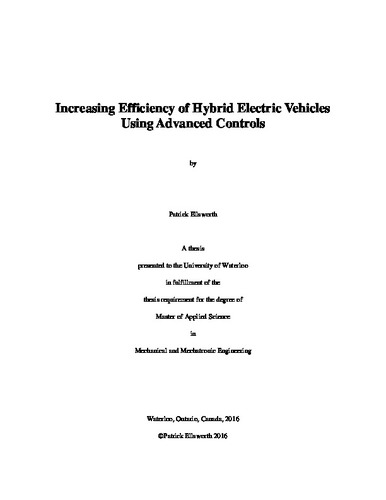 The drive to improve and optimize hybrid vehicle performance is increasing with the growing market of hybrids. This research is conducted on a student developed parallel split hybrid architecture. The architecture features an engine, transmission and two electric motors; one pre-transmission and one post-transmission. In order to complete this project, UWAFT has selected an 850 cc two-cylinder turbocharged engine that will operate on 85 % ethanol (E85) in a plug-in hybrid parallel split powertrain configuration. As most production hybrids have four-cylinder engines, this powertrain is seen as further electrification of hybrid electric vehicles. Different tests are conducted to demonstrate how the engine would operate in the vehicle. The results show that by running E85, the engine is able to produce up to 58% of the specified power rating with its first tune and provided validation for the capability of producing power in parallel operation. Additionally the model more accurately represents the speed matching capabilities of the engine. The control strategy operates the powertrain components in a series, parallel, and all electric power flow. Control strategies for these three power flows are compared through optimization of efficiencies within the powertrain. The resulting control strategy optimizations used by the team have increased the vehicle’s charge depleting range by 27.7 %., while decreasing energy consumption by 13.8 %.Additionally it produced a 30.5 % increase in miles per gallon gasoline equivalent in charge sustaining mode, increasing total range by 30.2%.Inspection of cell internal resistance (Rint) derived by the hybrid pulse power characterization (HPPC) tests indicates that Rint is a function of relative capacity (state of charge, or SOC), thus some SOC ranges are more efficient than others. Therefore energy losses can be minimized by placing charge sustaining operation in a more efficient SOC range. This creates three operational stages; the initial charge depleting stage to an efficient SOC, a charge sustaining stage until a recharge station is within reach, and a final charge depleting stage until arrival. When coupled with a known drive distance, this three segment Internal Resistance Based (IRB) control strategy increases the extended range electric vehicle (EREV) net battery efficiency from 96.8 to 97.3 % with an associated 14 % decrease in energy losses across the urban domestic drive schedule. Indirect benefits include an increased active SOC range, decreased urban emissions, and decreased waste heat generation, meeting the goals of Advanced Vehicle Technology Competitions.