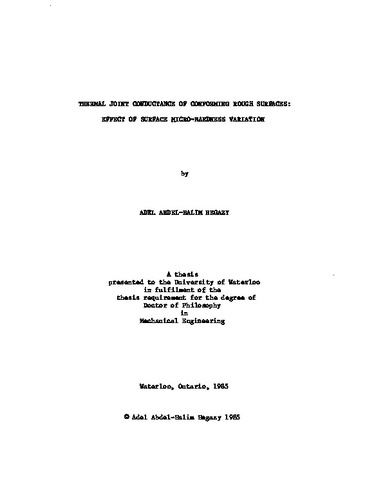 This work dealt with the problem of predicting contact, gap and joint conductances between conforming rough surfaces. The main purpose of the work was to investigate the effect of surface micro-hardness variation upon the prediction of thermal interface conductances under the first load cycle. A survey of the literature revealed that the title problem has received very little attention in the past three decades, especially from the thermal viewpoint. An investigation of surface micro-hardness variation was carried out. The investigation revealed that most engineering surfaces exhibit micro-hardness variation which depends upon the material type and the machining process. These findings were confirmed by a series of Vickers micro-hardness measurements for several engineering materials. A semi-general micro-hardness variation for these materials has been proposed which should be useful to thermal analysts. The theoretical thermal conductance models used in this work are those of Yovanovich and his co-workers. These models were reviewed and a mechanical model was proposed to estimate the appropriate contact hardness value required for accurate thermal predictions. The mechanical model was applicable for practical engineering joints and is a function of the surface parameters and the micro-hardness variation of a particular joint. An extensive experimental program was carried out employing different materials to verify the theoretical models over a broad range of surface roughnesses, thermophysical properties, micro-hardness variations and contact pressures. More than 400 contact conductance data points for Nickel 200, Stainless Steel 304, Zircolay-4 and Zirconium-2.5wt%Nb joints confirmed the validity the mechanical and contact conductance models. Also, experimental data for stainless steel joints in Nitrogen and Helium environments were obtained. The agreement between the measured and predicted joint conductances was excellent for Nitrogen data but seemed to break down for Helium. The deviations between some of the experimental data and the theoretical predictions were discussed. The discussion has emphasized the importance of the joints' geometric and thermophysical parameters which affected the predictions in vacuum or gaseous environments. The present work explained the apparent contradictory results obtained by various investigators for similar materials. It showed also that accurate thermal predictions depended more than had been realized upon the appropriate micro-hardness value which must be determined from the micro-hardness variation. The present work confirmed the validity of the investigated models.