Drop Size and Velocity Distributions in Sprays, A New Approach Based on the Maximum Entropy Formalism 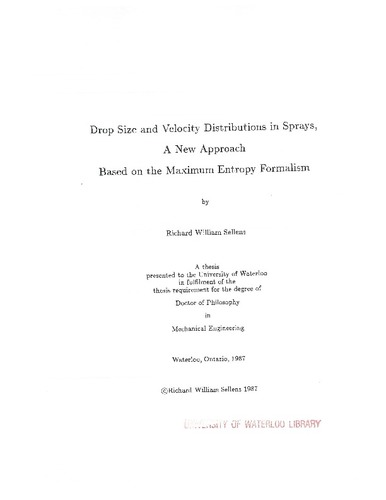 A new basis for the prediction of the drop size and velocity distribution in a spray is developed, using the maximum entropy formalism. The prediction considers the imposition of integral conservation constraints for mass, momentum and mechanical energy on the breakup of an undulating liquid sheet. The resulting drop size distribution is similar to the widely used empirical distributions, while the velocity distribution is Gaussian, with a variance that decreases with increasing drop size. Measurements were made in a simple water spray using the Phase / Doppler technique to obtain the joint size / velocity PDF. Photographic measurements were used to obtain an estimate of the geometry of the breakup region . Good agreement was found between the measurements and the predictions, except in the region where drag forces had strongly influenced the distribution. This discrepancy was expected, as drag effects were not included in the model.