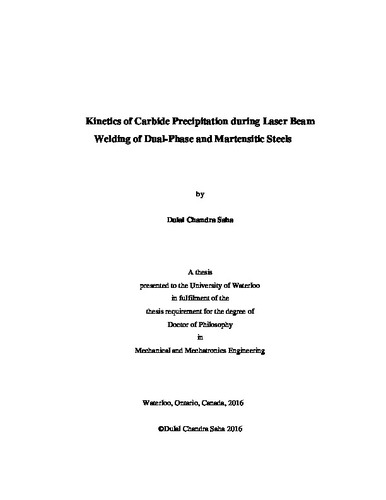 In order to ensure a high passenger safety and reduce greenhouse gas emissions, dual-phase (DP) and martensitic steels (MS) are increasingly being used in the automotive industries. However, the main issue in the welding of steels containing a metastable martensite phase is softening, which occurs in the sub-critical heat affected zone (SCHAZ) and deteriorates joint integrity. This work attempts to understand the martensite tempering kinetics involved during high-speed laser beam welding where steels are exposed to the rapid heating and cooling cycles. Fiber laser welding was performed on DP steel and its dissimilar combination with high strength low alloy (HSLA) steel. Different zones that produced at heat affected zone (HAZ) were characterized with respect to microstructure, micro- and nano-hardness, and tensile testing. Microstructural characterization suggests that the as-received martensite phase decomposes in the SCHAZ and forms various shapes and sizes of carbides, which reduces the local microhardness of the steel and subsequently the sample fractured in this zone during tensile loading. In addition, the chemical composition and microstructure of DP steel plays an important role in the tempering reaction kinetics. The study conducted on the DP780 steel composed of ferrite, martensite, and bainite microconstituents, exhibited increasing microhardness in the HAZ instead of softening. This phenomenon is referred to as “secondary hardening”. Rapid isothermal tempering conducted in a Gleeble simulator also indicated occurrence of secondary hardening at 500°C, as confirmed by plotting the tempered microhardness against the Holloman-Jaffe parameter. The mechanism of secondary hardening in this kind of a steel was unveiled by advanced characterization techniques carried out using transmission electron microscopy (TEM) with high-angle annular dark-field (HAADF) imaging. The experimental results suggested that the cementite (Fe3C) and TiC phases located in the bainite phase of DP780 steel decomposed upon rapid tempering to form needle-shaped Mo2C and plate-shaped M4C3 carbides giving rise to secondary hardening. In order to investigate the influences of steel microstructure on the martensite tempering kinetics two commercially produced DP980 grade steels were used. The study suggests that the severity of martensite tempering can be avoided by modifying the microstructure of the steels; the DP980 steel produced with a combination of martensite, ferrite, and a blocky retained austenite phase promotes high tensile strength of the laser welded joint similar to the un-welded material. Strength of the tempered martensite significantly differed depending on the nature of the tempering mode and heat input. Therefore, tempered martensite obtained from four different tempering modes was investigated. Extensive recovery and reduction of boundary regions was identified on the structure tempered slowly, whereas rapidly tempered structures retained a high density of dislocations and less decomposition of the lath structure. The study revealed that dislocation density has a prominent effect on the macroscopic strength of the tempered martensite over all other strength contributors. In addition, rapid thermal cycles retained a high density of dislocations after tempering thus improving the tempered martensite strength. Therefore, the combined effect of dislocation density and the rapid thermal cycle was investigated by deforming the martensitic sheets to different levels of plastic deformation and subsequently tempering using conventional furnace tempering and the laser beam welding. It was found that the increased dislocation density due to the plastic deformation caused more nucleation sites for cementite precipitation, short-range carbon diffusion, and shorter growth period of cementite. The morphologies of the cementite were changed from elongated to small quasi-spherical when the sheet was plastically deformed. The deformed and tempered martensite yielded higher microhardness resulting from finer and semicoherent precipitates, a high density of retained dislocation density, and the presence of untempered and partially tempered martensite blocks. The thermal analysis of martensite tempering carried out using a dilatometer suggests that the carbide precipitation temperature range increases to the higher tempering temperature when the sheet was subjected to rapid thermal cycles. Finally, a microstructural based model was applied to predict the yield strength and microhardness of the tempered martensite by incorporating the effects of heating rate, tempering temperature, and time. Experimental and modelling results suggest that the faster tempering mode in combination with a very short tempering duration provides the highest tempered martensite strength.