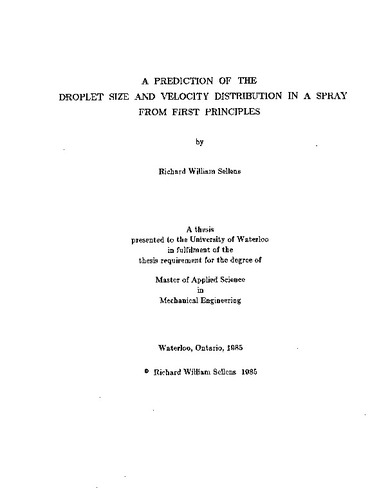 The maximum entropy formalism is used to predict the droplet size and velocity distribution in a spray resulting from the breakup of a liquid sheet. The physics of the process are described by simple conservation constraints for mass, momentum, surface energy and kinetic energy. The predicted size distribution is compared with four empirical distributions and found very similar to a Rosin - Rammler distribution with the same parameters. The predicted velocity distribution has a Gaussian cross section at any particular droplet diameter. The variance of the Gaussian decreases with increasing droplet diameter, so that the velocity is nearly single valued for large droplets, but varies widely for smaller droplets. This size and velocity distribution is propagated downstream using a simple physical model which assumes a uniform velocity air flow field, no evaporation, and treats the droplets as solid spheres. Although this is a substantial simplification, it shows that, in the absence of fluctuations in the air stream around the droplets, droplet velocity distributions collapse towards single values. This process takes place over distances which are short when compared to the scale of common spray systems.

Richard William Sellens (2016). A PREDICTION OF THE DROPLET SIZE AND VELOCITY DISTRIBUTION IN A SPRAY FROM FIRST PRINCIPLES. UWSpace. http://hdl.handle.net/10012/10836