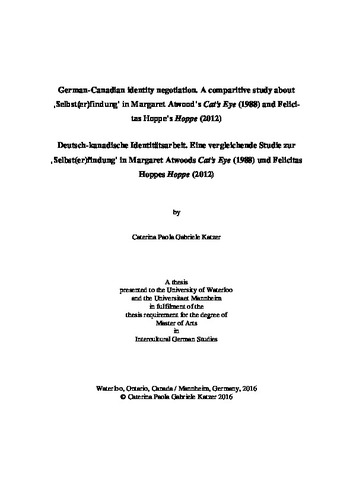 This thesis examines the identity construction, or rather negotiation, of the protagonists of the novels „Cat’s Eye“ (1988) by Margaret Atwood and „Hoppe“ (2012) by Felicitas Hoppe, who are both prize-winning authors of the present literature scene. As both no-vels are partly set in Canada, the question is raised as to whether there are intercultural differences in finding the self. One highly important aspect for building up an identity is the childhood of a person and under which circumstances and influences a child grows up. Memories are essential for writing an autobiography and having an identity. Therefore I first analyse the meaning of memory for the personal identity of the two protagonists and how that is related to the biographical novels. Secondly, I explore how identity is produced on the level of personal identity. The next chapter looks at personal identity by adapting the theory about childhood, adolescence and adulthood by the psychoanalyst Erik. H. Erikson. Furthermore, the concept of Robert Havighurst about the developmental tasks everyone has to face in his life, is applied to the two protagonists Elaine Risley and Felicitas Hoppe. Among these psychosocial, sociological, and psychological concepts, the role theories of Erving Goffman and Lothar Krappmann are also very interesting for the social life of the two women, as they struggle with their closest connections of family and friends and try to find their roles in life. Gender roles and being a victim are of spe-cial importance in this case. The last chapter about personal identity deals with the self concept of Elaine and Felicitas and how it was built up in childhood. Collective identity appears in this thesis through the picture of national identity both novels reveal. How should a Canadian or a German be and, especially, how is Canada displayed in the two current novels? Atwood is narrating the history of Toronto and the sociohistory of Canada from the 40s until the late 80s of the last century in „Cat’s Eye“. Hoppe tells the reader more about several countries and how Felicitas’ life is affected by the characteristics of the nationalities and its people. The concluding chapter deals with the search and need for home, which both women have. It explains what home can be for a person and analyses which landscapes, countries, and values can mean home for Elaine and Felicitas.