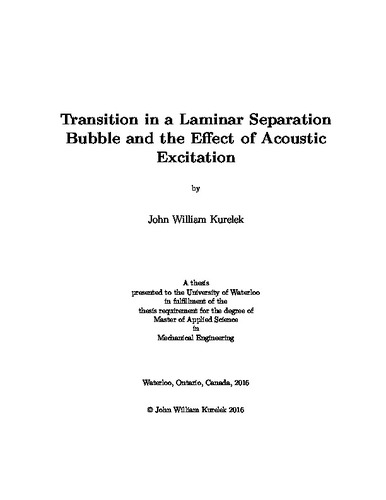 Flow development within a laminar separation bubble and the effect of controlled acoustic excitation are investigated experimentally for a NACA 0018 airfoil at a chord Reynolds number of 125 000 and an angle of attack of 4°. The investigation is carried out in a series of wind tunnel tests and employs a combination of surface pressure measurements and time-resolved, planar, two-component Particle Image Velocimetry. Both streamwise and spanwise aspects of the flow development are assessed. Three types of acoustic excitation are investigated: (i) harmonic: tonal excitation at the frequency of the most amplified disturbances in the natural flow, (ii) subharmonic: tonal excitation at the subharmonic frequency, and (iii) random: white noise filtered to the naturally unstable frequency band. For all the cases examined, the results show that strongly periodic shear-layer vortices form in the separation bubble due to the amplification of disturbances in the separated shear layer. The formation of these structures is found to occur when velocity fluctuations reach a critical amplitude equal to approximately 6% of the free-stream velocity. These structures feature strong spanwise coherence at roll-up; however, they deform rapidly upstream of the mean reattachment point. Spanwise undulations in the vortex filaments develop in a non-periodic fashion, with the spanwise wavelength shown to be predominantly two and a half times the characteristic streamwise wavelength of the structures. These spanwise deformations lead to regions of local vortex breakup, which expand rapidly as the vortices approach the mean reattachment point. This is accompanied by a rapid decay of the spanwise coherence length, which reaches a value typical of turbulent boundary layers downstream of mean reattachment. Harmonic and random excitations are found to decrease the separation bubble in size, with the effect becoming more pronounced with increasing amplitude. The changes in the mean bubble topology are linked to alterations in the features of the shear layer vortices. Specifically, these types of excitation cause earlier shear layer roll-up, which results in the aft portion of the bubble shifting upstream. Harmonic excitation is shown to organize the shedding process and increase the spanwise coherence of the vortices, while random excitation has the opposite effect. It is proposed that mean reattachment in a separation bubble is a result of momentum exchange between the outer-flow and the near wall region, which can be facilitated by either the coherent roll-up vortices or the smaller scale structures that result from their breakdown, with the latter proving to be more effective. Subharmonic excitation is shown to promote periodic and spanwise non-uniform vortex merging, which otherwise occurs randomly in the unperturbed flow. The results demonstrate that the development of shear-layer vortices plays the fundamental role in defining the separation bubble, and the later stages of transition are directly related to the breakdown of these structures in the aft portion of the bubble.

John Kurelek (2016). Transition in a Laminar Separation Bubble and the Effect of Acoustic Excitation. UWSpace. http://hdl.handle.net/10012/10704