Mary's Honour in The Protoevangelium of James 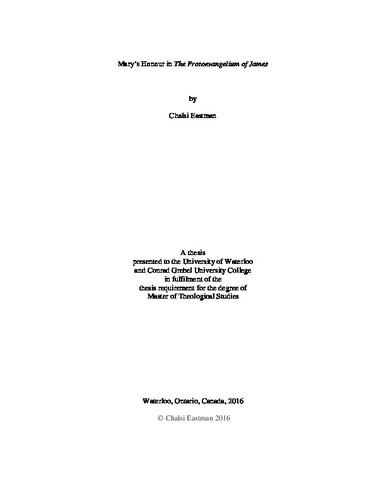 This thesis will argue that the Protoevangelium of James was an apologetic text written to demonstrate Mary’s ascribed and acquired honour. By establishing Mary’s honour the text also defends the honour of Jesus and early Christians. The text indirectly addresses the charges about Jesus’ illegitimacy and Mary’s sexual behavior by emphasizing Mary’s purity and virginity, before and after the conception and birth of Jesus. Such an emphasis would have served to redeem Mary’s honour. The Prot. Jas. first establishes Mary’s honour through her parents, Anna and Joachim. They are portrayed as wealthy and respectable people who are very concerned with purity and righteous behaviour. Anna closely monitors Mary as a young child and takes precautions to ensure that Mary does not do anything that would be considered impure as a young girl, including turning her bedroom into a sanctuary, controlling what she ate, and only allowing Mary to be in the company of other pure people. Mary is then cared for by the temple priests, and finally Joseph becomes her guardian. The Prot. Jas. portrays Joseph as Mary’s caretaker instead of husband to ensure that it is clear Mary and Joseph did not have a sexual relationship. The Prot. Jas. then establishes Mary’s acquired honour through her actions as a young woman to remain pure and celibate for the entirety of her life. When Mary becomes pregnant she must proclaim her innocence multiple times throughout the text, every time promising that she has never been with a man. After the birth of Jesus she endures an exam to prove that even post-partum, Mary is still a virgin. In the Prot. Jas. Mary becomes the two most honourable things a woman could be in Mediterranean antiquity, mother and virgin.