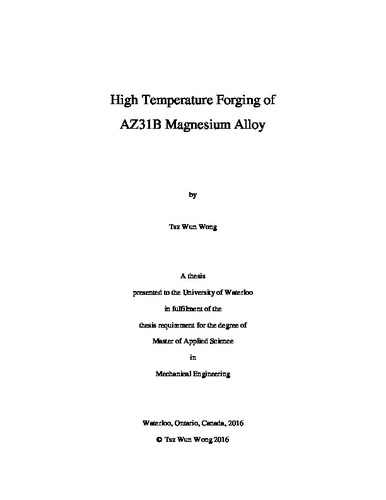 Isothermal uniaxial compression tests were conducted on AZ31B magnesium alloy with the intention of applying the findings to an industrial forging operation. Given the poor workability of magnesium at low temperatures, deformation was conducted in the temperature range of 300°C to 500°C, at strain rates of 0.001/s to 1.0/s. Small cylindrical compression samples (Ø10mm by 15mm) were extracted from a commercially available extruded rod in two orientations: along the extrusion direction (ED), and along the transverse direction (TD). In addition, samples were extracted from a large cast ingot and used to evaluate the impact of homogenization on the deformation behaviour. Both ED and TD samples from the extruded rod exhibited elliptical cross-sections after deformation, with samples deformed at 300°C and high strain rate resulting in fracture. The preferential material flow observed was attributed to the initial texture in the extruded rod. The anisotropy in the ED samples was observed to be dependent on strain rate, with deformation at the lowest strain rate of 0.001/s resulting in circular cross-sections. On the contrary, the anisotropy in the TD samples showed strong dependence on deformation temperature. Deformation at high temperature and high strain rate resulted in minimal anisotropy. Deformation of the extruded material at temperatures below 450°C resulted in the formation of shear bands; therefore these processing conditions should be avoided for bulk deformation processes. Although no viable processing conditions were observed in the as-cast condition, the workability window was greatly improved after homogenization at 450°C for five hours. Deformation could be conducted at high temperature (i.e. above 400°C) and high strain rate (i.e. 1.0/s) without the formation of surface cracks. Furthermore, it was observed that a furnace soak in the temperature range of 400°C to 500°C for five hours had suppressed melting of the Mg17Al12 phase. In addition, it was observed that higher strains could be achieved by processing at higher deformation temperatures. The volume fraction of DRX grains and the DRX grain size were observed to increase with deformation temperature and with decreasing strain rate. Comparing the extruded and cast-homogenized samples under the same deformation conditions, it was evident that the extruded material exhibited a higher volume fraction of DRX grains, despite very similar DRX grain sizes. Slow cooling of the samples after deformation revealed rapid grain growth in the early stages, but longer times at high temperature had little to no impact on the final microstructure. The use of processing maps to predict viable hot working conditions revealed the inadequacies associated with applying such a numerical approach to predict the mechanisms within a dynamic process. The maps proved to be very sensitive to input data, and inconsistencies between the predictions and the actual microstructure were observed for several processing conditions. Deformation was successfully conducted on both the extruded and cast-homogenized conditions at 500°C and 1.0/s, to a true strain of 1.0, with no observable damage to the final microstructures. However, a higher volume of DRX grains was observed with the extruded material. With preference given to high strain rate processing conditions for economic reasons (i.e. higher production rates), the proposed processing condition proved to be viable for an industrial forging application.