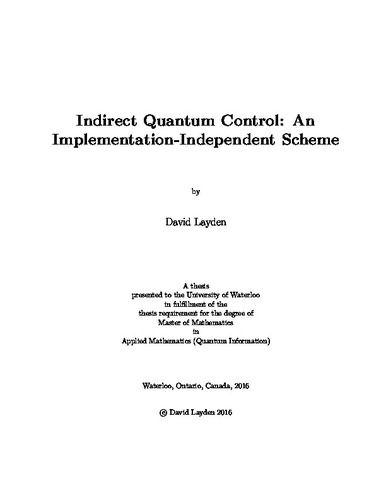 The ability to control quantum systems rapidly as compared to their coherence times is a central requirement for most proposed quantum technologies, such as quantum computing and quantum metrology. Improving the ratio of control timescales to coherence times, however, is made difficult by the fact that both timescales depend on the coupling strength between systems and their environment. One promising method of improving this ratio involves indirect control: steering a quantum system via a quantum actuator, rather than by driving it directly. While this approach has shown promise in a variety of experimental settings, all implementations to date have relied crucially on special properties of the system at hand, and the control schemes they have used are not generally applicable to arbitrary systems. Here we propose an implementation-independent indirect control scheme. It relies upon an unexpected emergent feature of a model in which a quantum system is made to interact with a rapid succession of ancillas, one at a time. We introduce this model by discussing the quantum Zeno effect, a special instance of quantum control in which a state is preserved through frequent measurements. We then further develop the model and show how it can be used to construct a universal scheme for indirect quantum control. Finally, we discuss the possibility of using this scheme not only for coherent control, but also for dissipative quantum control, which has a number of important applications.