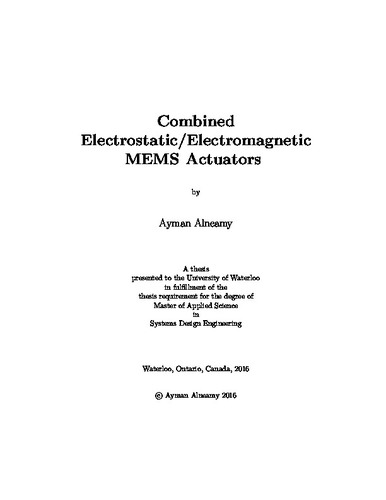 In this work, one and two degrees of freedom (DOF) lumped mass models of Micro- Electro-Mechanical System (MEMS) actuators are introduced, investigated, and compared to experimental results. A one degree of freedom system representing the actuators out-of plane bending motion under the electrostatic excitation is demonstrated. The capacitive gap between the movable plate and stationary electrode decreases when the microplate inclination angle is accounted for in the model. We investigate experimentally the primary, superharmonic of order two, and subharmonic of order one-half resonances of an electrostatic MEMS actuator under direct excitation. We identify the parameters of a 1-DOF generalized Duffing oscillator, model that represents it. The experiments were conducted in soft vacuum in order to reduce squeeze- film damping and the actuator response was measured optically using a laser vibrometer. The predictions of the identified model were found to be in close agreement with the experimental results. We also identified the power level of process (actuation voltage) and measurement noise. A one DOF model of the actuator's torsional motion under the electrostatic torque is also introduced. It was found that utilizing electrostatic actuation in torsional motion is not e ffective. The maximum angle obtained was 0.04 degrees at high voltage. Finally, a novel two DOF model of the MEMS actuator's torsion and bending under electrostatic and electromagnetic excitation was demonstrated analytically and compared to experimental results. Torsional motions were driven by a torque arising from a Lorentz force. It succeeded in generating a large torsion angle, 1 degree at 1.35 T magnetic field density, and a current of 3.3 mA.