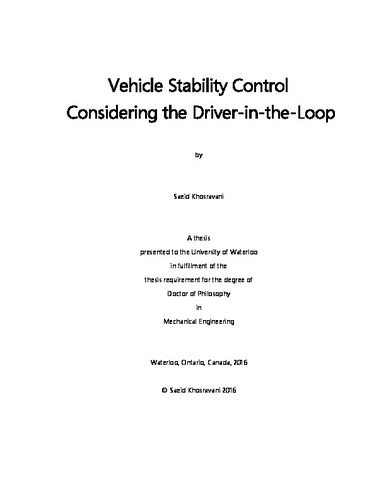 A driver‐in‐the‐loop modeling framework is essential for a full analysis of vehicle stability systems. In theory, knowing the vehicle’s desired path (driver’s intention), the problem is reduced to a standard control system in which one can use different methods to produce a (sub) optimal solution. In practice, however, estimation of a driver’s desired path is a challenging – if not impossible – task. In this thesis, a new formulation of the problem that integrates the driver and the vehicle model is proposed to improve vehicle performance without using additional information from the future intention of the driver. The driver’s handling technique is modeled as a general function of the road preview information as well as the dynamic states of the vehicle. In order to cover a variety of driving styles, the time‐ varying cumulative driver's delay and model uncertainties are included in the formulation. Given that for practical implementations, the driver’s future road preview data is not accessible, this information is modeled as bounded uncertainties. Subsequently, a state feedback controller is designed to counteract the negative effects of a driver’s lag while makes the system robust to modeling and process uncertainties. The vehicle’s performance is improved by redesigning the controller to consider a parameter varying model of the driver‐vehicle system. An LPV controller robust to unknown time‐varying delay is designed and the disturbance attenuation of the closed loop system is estimated. An approach is constructed to identify the time‐varying parameters of the driver model using past driving information. The obtained gains are clustered into several modes and the transition probability of switching between different driving‐styles (modes) is calculated. Based on this analysis, the driver‐vehicle system is modeled as a Markovian jump dynamical system. Moreover, a complementary analysis is performed on the convergence properties of the mode‐dependent controller and a tighter estimation for the maximum level of disturbance rejection of the LPV controller is obtained. In addition, the effect of a driver’s skills in controlling the vehicle while the tires are saturated is analyzed. A guideline for analysis of the nonlinear system performance with consideration to the driver’s skills is suggested. Nonlinear controller design techniques are employed to attenuate the undesirable effects of both model uncertainties and tire saturation.