The Application of Occupancy Modeling to Evaluate the Determinants of Distribution of Jaguars Panthera onca, Pumas Puma concolor, and Valued Prey Species in a Protected Area 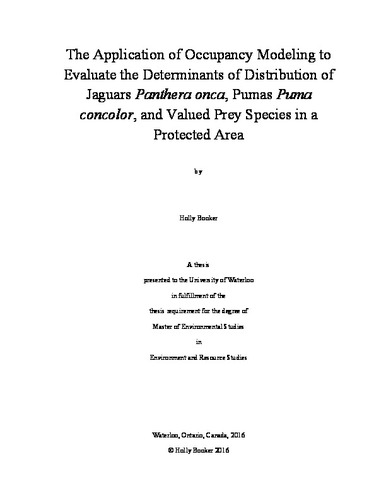 In the past four decades, both biodiversity and individual populations of numerous species in the tropics have consistently declined. Tropical forests constitute only 6% to 7% of the Earth’s surface, yet they contain more than half of all species richness, making them a significant reservoir for global biodiversity. Maintaining healthy populations of both predators and prey in the tropics is therefore crucial for supporting dynamic ecosystems and for preserving biodiversity. As apex predators, jaguars Panthera onca and pumas Puma concolor play a critical role in helping to support dynamic tropical ecosystems. Correspondingly, prey species of value to these felids are equally important. Ecological models have become valuable tools for facilitating an understanding of how species distribution is influenced by natural landscape variables and anthropogenic factors. The objectives of this study were to utilize hierarchical occupancy modeling to assess if jaguars, pumas, and valued prey species (brocket deer Mazama sp., white-tailed deer Odocoileus virginianus, collared peccary Pecari tajacu, white-lipped peccary Tayassu pecari, lowland paca Cuniculus paca, Central American agouti Dasyprocta punctate, and white-nosed coati Nasua narica) are non-randomly distributed across the Calakmul Biosphere Reserve in Campeche, Mexico, and how natural and anthropogenic features are influential in shaping this distribution. Because felid distribution is thought to largely depend on prey availability, latent occupancy estimates for focal prey were also incorporated into occupancy models for jaguars and pumas. Spoor sampling was conducted using line transects in four survey areas throughout the core and buffer zone of the reserve from June 25th to August 8th, 2013. Detection histories for focal species were utilized for occupancy modeling that was completed in the ‘unmarked’ package in R. It was determined that distribution was random for brocket and white-tailed deer species, was largely random for collared peccary, and non-random for white-lipped peccary, large prey as a group, and medium prey species collectively. Model averaged occupancy of collared peccary was 30% higher than it was for white-lipped peccary and occupancy was weakly associated with increasing tree species richness. White-lipped peccary occupancy was lower in areas with decreased tree species richness and diminished total basal area, likely corresponding to disturbed habitat. Occupancy of large prey as a collective group had a weak negative association with proximity to water (aguadas specifically). A weak association of site (survey area) was found for occupancy of medium prey collectively, as models exhibited higher occupancy estimates for the survey areas located in the core zone of the CBR, which is an area intended to be free of disturbance. Distribution of jaguars and pumas was found to be primarily influenced by occupancy of brocket deer and medium prey species. There was also a weak negative association with proximity to an aguada. Results from this study reinforce the need for evaluating tropical species occupancy, as understanding the factors that are influential in determining distribution is quite complex. Due to the troubling status of jaguars and pumas, understanding how landscape variables, as well as prey occupancy, influences their distribution is of utmost importance to ensure that critical habitat is protected and/or restored and that human-wildlife conflicts are minimized. This study is the first to explicitly integrate both landscape variables and latent occupancy of prey species as covariates in occupancy models for jaguars and pumas and it adjoins only a handful of studies that model occupancy of the focal species in Mexico.

Holly Booker (2016). The Application of Occupancy Modeling to Evaluate the Determinants of Distribution of Jaguars Panthera onca, Pumas Puma concolor, and Valued Prey Species in a Protected Area. UWSpace. http://hdl.handle.net/10012/10555