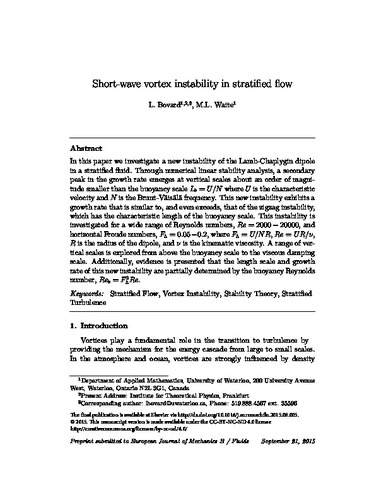 In this paper we investigate a new instability of the Lamb–Chaplygin dipole in a stratified fluid. Through numerical linear stability analysis, a secondary peak in the growth rate emerges at vertical scales about an order of magnitude smaller than the buoyancy scale Lb=U/NLb=U/N where U is the characteristic velocity and N is the Brunt–Väisälä frequency. This new instability exhibits a growth rate that is similar to, and even exceeds, that of the zigzag instability, which has the characteristic length of the buoyancy scale. This instability is investigated for a wide range of Reynolds numbers, Re=2000–20000, and horizontal Froude numbers, Fh=0.05–0.2, where Fh=U/NR, Re=UR/ν, R is the radius of the dipole, and ν is the kinematic viscosity. A range of vertical scales is explored from above the buoyancy scale to the viscous damping scale. Additionally, evidence is presented that the length scale and growth rate of this new instability are partially determined by the buoyancy Reynolds number, Reb=Fh^2Re.