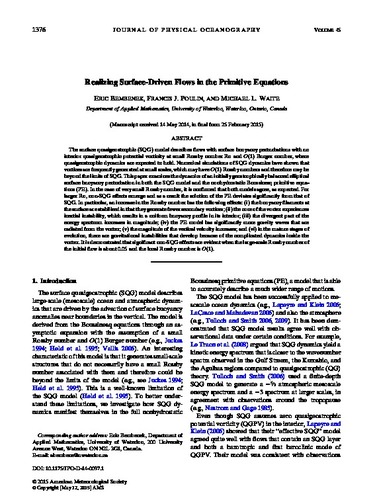 The surface quasigeostrophic (SQG) model describes flows with surface buoyancy perturbations with no interior quasigeostrophic potential vorticity at small Rossby number Ro and O(1) Burger number, where quasigeostrophic dynamics are expected to hold. Numerical simulations of SQG dynamics have shown that vortices are frequently generated at small scales, which may have O(1) Rossby numbers and therefore may be beyond the limits of SQG. This paper examines the dynamics of an initially geostrophically balanced elliptical surface buoyancy perturbation in both the SQG model and the nonhydrostatic Boussinesq primitive equations (PE). In the case of very small Rossby number, it is confirmed that both models agree, as expected. For larger Ro, non-SQG effects emerge and as a result the solution of the PE deviates significantly from that of SQG. In particular, an increase in the Rossby number has the following effects: (i) the buoyancy filaments at the surface are stabilized in that they generate fewer secondary vortices; (ii) the core of the vortex experiences inertial instability, which results in a uniform buoyancy profile in its interior; (iii) the divergent part of the energy spectrum increases in magnitude; (iv) the PE model has significantly more gravity waves that are radiated from the vortex; (v) the magnitude of the vertical velocity increases; and (vi) in the mature stages of evolution, there are gravitational instabilities that develop because of the complicated dynamics inside the vortex. It is demonstrated that significant non-SQG effects are evident when the large-scale Rossby number of the initial flow is about 0.05 and the local Rossby number is O(1).