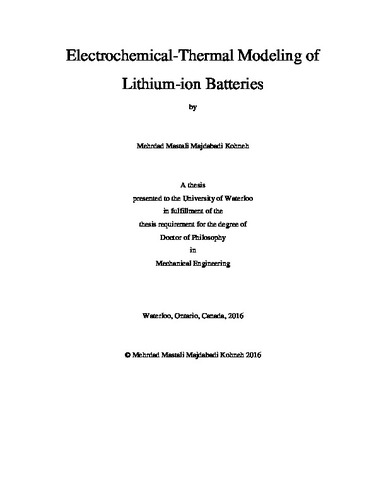 Incorporating lithium-ion (Li-ion) batteries as an energy storage system in electric devices including electric vehicles brings about new challenges. In fact, the design of Li-ion batteries has to be optimized depending on each application specifications to improve the performance and safety of battery operation under each application and at the same time prevent the batteries from quick degradation. As a result, accurate models capable of predicting the behavior of Li-ion batteries under various operating conditions are necessary. Therefore, the main objective of this research is to develop a battery model that includes thermal heating and is suitable for large-sized prismatic cells used in electric vehicles. This works starts with developing a dual-extended Kalman filter based on an equivalent circuit model for the battery. The dual-extended Kalman filter simultaneously estimates the dynamic internal resistance and state of the charge of the battery. However, the estimated parameters are only the fitted values to the experimental data and may be non-physical. In addition, this filter is only valid for the operating conditions that it is validated against via experimental data. To overcome these issues, physics-based electrochemical models for Li-ion batteries are subsequently considered. One drawback of physics-based models is their high computational cost. In this work, two simplified one-dimensional physics-based models capable of predicting the output voltage of coin cells with less than 2.5% maximum error compared to the full-order model are developed. These models reduce the simulation computational time more than one order of magnitude. In addition to computational time, the accuracy of the physico-chemical model parameter estimates is a concern for physics-based models. Therefore, commercial LiFePO4 (LFP) and graphite electrodes are precisely modelled and characterized by fitting experimental data at different charge/discharge rates (C/5 to 5C). The temperature dependency of the kinetic and transport properties of LFP and graphite electrodes is also estimated by fitting experimental data at various temperatures (10 ºC, 23 ºC, 35 ºC, and 45 ºC). Since the spatial current and temperature variations in the large-sized prismatic cells are significant, one-dimensional models cannot be used for the modeling of these prismatic cells. In this work, a resistor network methodology is utilized to combine the one-dimensional models into a three-dimensional multi-layer model. The developed model is verified by comparing the simulated temperatures at the surface of the prismatic cell (consist of LFP as the positive and graphite as the negative electrode) to experimental data at different charge/discharge rates (1C, 2C, 3C, and 5C). Using the developed model the effect of tab size and location, and the current collector thickness, on the electrochemical characteristics of large-sized batteries is evaluated. It is shown that transferring tabs from the edges and the same side (common commercial design) to the center and opposite sides of the cell, and extending them as much as possible in width, lowers the non-uniformity variation in electrochemical current generation.