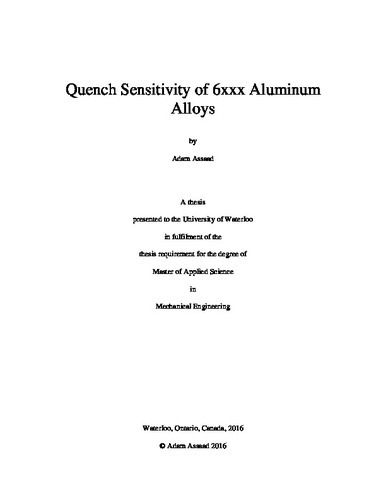 The use of AA6xxx series alloys continues to grow with the increasing demand for more fuel efficient vehicles. AA6xxx series alloys are commonly used in automotive applications because of their extrudability and good strength/weight ratio. As the use of these alloys becomes more prominent, new technologies must be developed to improve them. Chromium has been used as an alloy addition to AA6xxx alloys to control the grain structure by creating dispersoids that pin grains and limit grain growth and thereby improve the mechanical properties of aluminum alloys. However, the addition of chromium and other transition metals can have some adverse effects on aluminum alloys including making them more quench sensitivity after processing. The objective of this research was to do study the effect of alloy composition including the effect of Cr on the quench sensitivity of AA6xxx aluminum alloys, and to measure the effect of quench sensitivity on subsequent mechanical properties both in the T4 (naturally aged) and T6 (artificially aged) temper conditions. The experiments were conducted using a standard Jominy quenched end test and also included tensile testing for various quenching conditions for the AA6xxx alloys studied. The Jominy test provided a large range of cooling rates, which provided data for the variation in hardness as a function of cooling history. Supplemental tests were done on the alloys using tensile samples and water, air and furnace cooling to see what effect these cooling histories had on mechanical properties. It was found that the addition of Cr and Mn to the AA6xxx alloy caused an increase in quench sensitivity, and the cooling rate during quenching had a strong effect on the mechanical properties. It was found that AA6063 can be air cooled or cooled at a rate of ~0.8°C/s (48°C/s) after extrusion to retain 90% of its peak yield strength. Composition 1 (high Cr) must be cooled at a rate of at least ~25°C/s (1500 °C/min) in order to retain 90% of its peak yield strength. Composition 3 (high Cr and Mg) must be cooled at a rate of ~30°C/s in order to retain 90% of its peak yield strength.