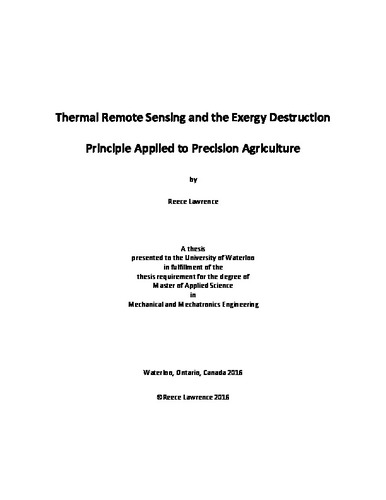 The objective of this thesis is to investigate the application of exergy analysis for classifying the health and maturity of ecosystems as defined by the exergy destruction principle and to determine its suitability as a tool within the precision agriculture industry. In doing so, this thesis presents some initial background information of precision agriculture but then heavily focuses on the core principles of exergy theory, starting with a general thermodynamical background, followed by a review of solar exergy, and concluding with a thorough review of the exergy destruction principle. Finally, the experiments which were conducted as part of the field work for this thesis will be presented and discussed. Through the investigation of the interaction of exergy with living (and non-living) systems, a connection becomes clear between ecosystem development (complexity) and exergy destruction. As illustrated in principle with the Bénard cell, as systems become more complex they require increasing amounts of work potential in order to maintain structure. Conversely, as part of the redeveloped second law of thermodynamics, it is shown that any system which is imparted with a gradient will organize itself as to mitigate the effect. By identifying the importance of surface temperature to the exergy flows of an ecosystem via the exergy destruction principle, it allows for various characterizations of both health and maturity to be inferred through thermal remote sensing. With applications for precision agriculture in mind, the effectiveness of utilizing remotely sensed surface temperature in order to infer crop health (stress) and crop complexity (yield) is tested and discussed. Based on initial trials in both realistic field and controlled greenhouse conditions, there appears to be a statistically significant correlation between surface temperature and stress artificially induced in both the nitrogen and weed trials in corn and wheat. Yield also appears to be correlated with surface temperature, as was suggested by previous research. These results suggest that thermal remote sensing of temperatures can be utilized in a precision agriculture management regime in order to actively identify, and possibly quantify the effect of stress on crops.