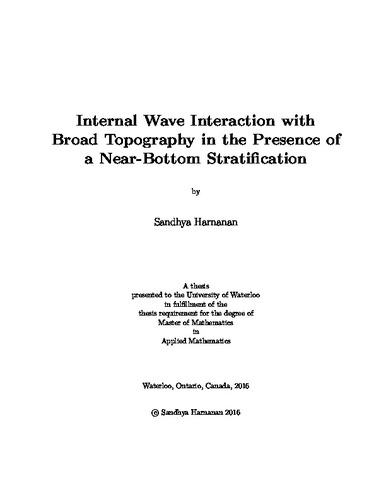 This thesis considers the impact of internal waves on the transport of suspended matter across the bottom boundary layer. High resolution two- and three-dimensional direct numerical simulations of fully nonlinear, laboratory-scale internal solitary waves propagating over broad topography with a near-bottom stratified layer are presented. A near-bottom stratification is used to represent a nepheloid layer, or a layer of previously suspended material found near the bottom. The three-dimensional, mapped coordinate, spectral allocation method employed in the simulations allows for accurate modelling of the near-boundary dynamics. Noise of two amplitudes are used to initialize the three-dimensional simulations, as the natural world has a broad range of naturally occurring ``noise". Both waves of depression and elevation are considered and the formation of the two distinct types of instabilities that result is discussed. The prograde jet at the back of the wave of depression rolls up at the hill crest, with subsequent vortex production. When a near-bottom stratification is present, the resulting vortex structures are smaller, less energetic and more confined to the hill when compared to an unstratified bottom. However, the instabilities still provide a means for transport across the bottom boundary layer in a significant geographical area. In the case of a wave of elevation, a novel type of gravity current forms in the near-bottom region as the wave moves over the topography. There is intense mixing of fluid in the leading edge of the current that moves along with the wave and also provides a means for transport across the bottom boundary layer. The effects of the two noise amplitudes are considered for each type of wave. Finally, a very brief extension of the results to the field-scale is presented.