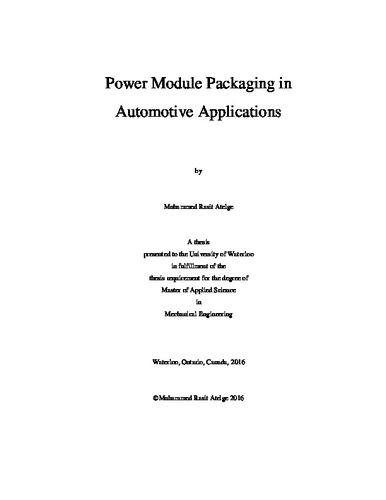 In this study, nano silver paste was used as die attach material with the aim of increasing reliability of joints in power modules in automotive applications. Prior to joining, nano silver paste was spread on the interface between silver coated copper substrates and dummy chips by screen printing method. 5 groups of samples were produced using three different joining techniques based on different combinations of ultrasonic force and persistent pressure in air and vacuum atmospheres. The bonding quality of the interface region was evaluated by microstructural examination and quasi-static shear tests. On the other hand, electrical properties of sintered nano silver particles within the joints were characterized through resistivity measurements. Sintered nano silver regions in all samples exhibited two types of porosity, namely, macro and micro porosity. Macro pores formed during the evaporation and removal of organics present in the starting paste, while micro pores were left in the structure because of insufficient sintering of silver nano powders. Although the sintered silver interface in samples produced using 5 MPa persistent pressure in air displayed a minimum amount of porosity, pores as large as 5 m in diameter were observed in joints produced in air by a preload of 0.01 MPa with or without ultrasonic force. In addition, vacuum sintering yielded relatively porous interfaces compared to samples manufactured in air even though the same compaction pressure was applied during sintering. Accordingly, in the samples produced either in air by the application of low preloads of 0.01 MPa or in vacuum at 5MPa, additional microcracks were formed, particularly in the interface region between silver coating and sintered nano silver particles. Stress-strain curves of the joints exhibited linear elastic, small strain hardening and fracture regions similar to wrought alloys. The strengths of the joints increased proportionally to the degree of sintering as expected. The shear strength reached to 32 MPa in samples sintered in air at 5 MPa constant pressure, whereas shear strength decreased to 4 MPa in highly porous joints produced by ultrasonic force and preloading with 0.01 MPa. All samples revealed shear-type dimples in the direction of mechanical testing indicating ductile behavior of joints. The electrical resistivity of the sintered nano silver layer showed the same trend as the mechanical properties. The weakest or most porous joint had the highest electrical resistivity of approximately 125.5 μΩ-cm). On the other hand, the least porous silver joint, manufactured at 5 MPa constant pressure in air exhibited the lowest electrical resistivity (7.8 μΩ-cm); however, it was five times higher than that of bulk silver. The results have presented that the nano silver paste is the most promising die attach material to replace conventional solder and conductive epoxies.