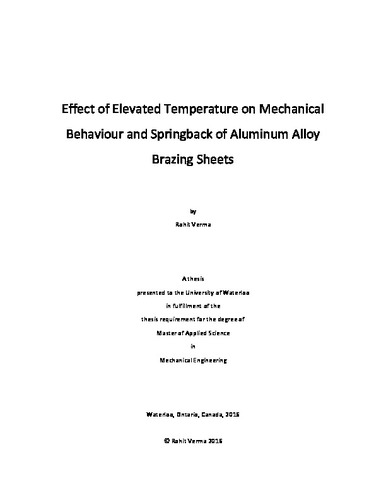 The current work investigates the effect of warm forming process parameters on springback of AA3003 brazing sheets, comprising a modified AA3003 core with a lower melting point AA4045 clad layer used to promote brazing. Three temper conditions were considered including O-, H22- and H24-temper. Two custom tooling sets were designed to form U-shaped channels, allowing forming temperature, blank holding force and lubricant type to be varied. The forming temperature range considered was from room temperature to 300°C. The formed specimen cross sections were measured and the net shape was evaluated in terms of the measured versus ideal sidewall angle. Tensile tests were conducted to characterize material behaviour for the range of temperature considered in the forming experiments. The results showed thermal softening and increased strain-rate sensitivity at elevated temperature in the O-, H22-, and H24-tempers, which results in lower forming stresses and thus lower springback. The room temperature strength is recovered after warm forming. Ductility increased significantly at elevated temperature; however, the harder temper conditions exhibited negative strain hardening for high temperatures at strains beyond the ultimate tensile strength. The experiments revealed that springback reduced steadily for all three tempers as the forming temperature was increased from room temperature to 250°C. The effect of temperature on springback was relatively small for the O-temper condition, but significant for the high-strength tempers. At a forming temperature of 250°C, the H22-and H24-tempers exhibited springback reduction of 95% and 92%, in terms of deviation from the ideal sidewall angle, relative to springback at room temperature, respectively. The stress-strain data was used to create a numerical model for predicting springback after U-channel forming. One challenge in developing constitutive model parameters for this work was the negative hardening response exhibited by the harder temper conditions at higher temperatures. This caused numerical instabilities, requiring the use of approximate fits to the material response. The sidewall angle deviation and flange angle were predicted after springback. The numerical models qualitatively captured the reduction in springback with increase in forming temperature, but quantitative differences in the predicted and measured extent of springback exist. Sensitivity analysis using the model showed that friction coefficient and constitutive fit had a large influence on predicted springback. Future studies should address the complex material response data at elevated temperature and develop a more detailed temperature- and strain-rate dependent constitutive model.