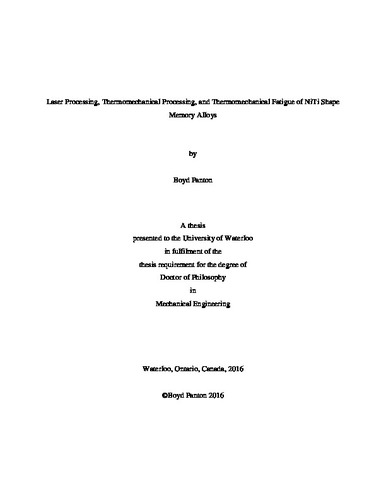 NiTi shape memory alloys (SMAs) have revolutionized engineering design across all industries, with major contributions in the medical, aerospace, and automotive industries. These fascinating materials possess the shape memory effect, pseudoelastic effect and biocompatibility, which make them so highly desired. Since their discovery mid-way through the 20th century a large research effort has been underway to gain fundamental understanding of the mechanisms responsible for their properties. The material properties depend on a large number of variables including the microstructure, the texture, the stress/strain state, and the temperature. An understanding of the interdependence of these variables is still being developed, with particular focus on their evolution when either multi-axial loading, or fatigue cycling are applied to the material. Furthermore, the advanced manufacturing techniques required to properly process NiTi have only recently become a reality, with further advancements being developed to continue pushing the limits of these materials. One limitation of NiTi is that standard manufactured products have only one transformation temperature. A number of techniques have been developed in an attempt to address this limitation and increase the functionality of SMAs. A highly accurate and repeatable technique was recently developed that uses a high energy density process (e.g. laser) to alter the composition of NiTi in localized regions. Laser processing enables the tailoring of different regions of a single piece of NiTi to have different transformation properties. However, there have been no in-depth studies of the evolution of the properties of these laser processed materials over multiple mechanical or thermal cycles. This lack of fundamental knowledge significantly limits both the understanding and possibilities for the application of laser processed NiTi. In addition to this limitation, the most widely used form of NiTi SMA is wires, but the major studies on laser processing have focused on sheets. Investigation of the evolution of laser processed NiTi wires over multiple mechanical or thermal cycles would not only benefit laser processing technologies, but it would also improve the general understanding of SMAs, with benefits to other areas including other local processing techniques, welding and joining, mechanical and thermomechanical fatigue. The current study investigated the evolution of the properties of laser processed NiTi when the materials were subjected to thermal cycling, mechanical cycling, and fatigue cycling. The knowledge gained was used to identify limitations in the current technology, and develop thermomechanical treatments to address these limitations. The first part of the investigation focused on a wire that had a single laser processed spot (i.e. a laser weld). Few investigations have been attempted to characterize the mechanical fatigue properties of NiTi joints, and to the author’s knowledge there have been no previous investigations on the thermomechanical fatigue properties of these joints. The current work investigated the thermomechanical fatigue properties of Nd:YAG pulsed laser welded, and post-weld heat treated NiTi wires. The welded wires maintained over 86 % of the base metal ultimate tensile strength; however, they had reduced actuation stability and stroke, and had significantly reduced cycle life. Use of a post-weld heat treatment successfully increased both the actuation stability and the cycle life by an order of magnitude compared to the welded wires. The second part of the investigation focused on the development and characterization of laser processing techniques for NiTi wires. The process altered the composition of the NiTi wire with a reduction of 0.23 at.% Ni for each laser pulse after the first pulse. The first laser pulse removed 0.40 at.% Ni, which was a larger amount than the following pulses, because the wire drawn surface finish was less reflective than the laser processed surface. The coarse grained laser processed NiTi had 71 % of the base metal ultimate tensile strength, 40 % of the base metal ductility, significant reduction in the stability of the shape memory properties, and an almost complete loss of the fatigue life of the base metal. Using the fundamental knowledge gained from this investigation a thermomechanical treatment was developed to improve the properties of the laser processed NiTi. The treated laser processed NiTi had an ultimate tensile strength matching the base metal and a ductility 70 % greater than the laser processed NiTi. Significant improvement to the shape memory properties were achieved, with a return of pseudoelasticity, and an 80% greater shape memory recovery than the untreated laser processed NiTi. Furthermore the low strain (i.e. 2%) thermomechanical fatigue lives of the treated laser processed NiTi were equal to the base metal. Finally, actuators were developed with two distinct memories, with the treated actuator having 33 % lower plastic strain, and 42 % greater shape memory recovery than the untreated actuator. This technology was exploited to develop a self-biasing actuator. A shape memory alloy (SMA) actuator that is biased internally (i.e. self-biasing) would not need an external bias to achieve multiple actuation cycles. This would reduce cost, complexity and weight compared to standard one-way SMAs. The self-biasing actuators that have been developed to date have a lack of geometric and actuation stability. The current study developed a self-biasing NiTi actuator using a laser based vaporization process to alter the bulk composition of a NiTi wire. The martensitic laser processed NiTi region was the actuator, and un-processed austenitic base metal region was the internal bias. It was discovered that the laser processed region of the self-biasing actuator was unstable during high stress thermomechanical cycling due to the coarse grained microstructure. Cold-working of the half martensitic and half austenitic component resulted in similar deformation characteristics to single phase NiTi, which enabled the formation of a uniform nanocrystalline microstructure in both regions. When thermomechanically cycled 6000 times under stresses ranging from 180 to 400 MPa, it was discovered that this treated self-biasing actuator exhibited the stabilization behaviour of traditional one-way actuators. This behaviour was due to the uniform nanocrystalline microstructure, which impeded dislocation activity and ensured minimal plastic deformation.