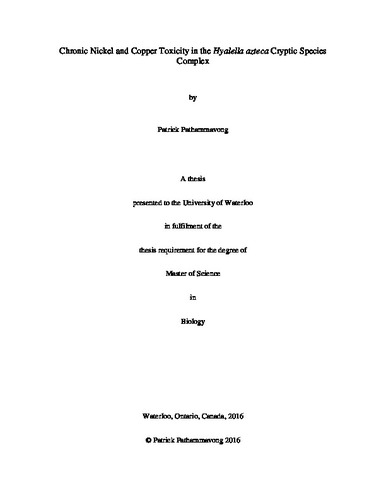 The amphipod crustacean Hyalella azteca was thought to be a single species, but recent molecular studies have indicated that it is a large cryptic species complex. Previous work has indicated that the H. azteca complex contains up to 85 genetically divergent lineages. Hyalella azteca has been frequently used in toxicity tests due to its sensitivity to contaminants, but past studies have examined the effects of toxicants with the assumption that H. azteca is a single species rather than a large cryptic species complex. Recently, a research group determined that two genetically characterized laboratory lineages (Clade 1 and 8) display different nickel and copper sensitivity in acute toxicity tests. In this study, Hyalella Clades 1 and 8 were subject to 28 day nickel and copper toxicity tests, and their survival and growth responses were compared. The estimated nickel and copper LC50s for Clade 8 were 2.65 and 1.47 times greater than that of Clade 1, respectively. Clade 8 amphipods also had a higher estimated LBC50, IBC25, and maximum tissue concentration for copper than that for Clade 1. However, the estimated nickel LBC50s and IBC25s were similar between the two clades, but bioaccumulation responses differed significantly. Although both clades are large-bodied ecomorphs, Clade 8 amphipods in the control and lower test concentrations had significantly higher dry weights after the 28 day exposures. These results complement an earlier study in that at least two lineages within the H. azteca cryptic species complex display different sensitivities to nickel and copper. Therefore, caution should be used when conducting toxicity tests with laboratory cultures that have not been genetically characterized as the results obtained may not be comparable.