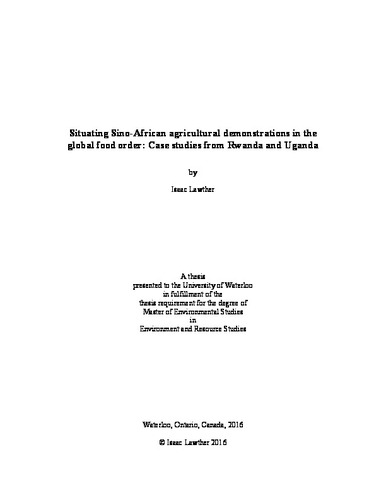 This thesis explores two Sino-African agricultural centres in Rwanda and Uganda that demonstrate Chinese agricultural technologies, and examines them as they relate to the changing global food order. When Sino-African agricultural engagement emerged as a topic of discussion in critical food studies literature in the mid-2000s, a number of scholars assumed the relationship was emblematic of a Chinese foray into Africa to grab land. However, since the first appearance of claims that the Chinese government and associated agricultural firms were orchestrating an agricultural venture in Africa, many Sino-African specialists focused their attention on countering these claims, instead arguing that China’s impact in rural Africa is quite modest, and the relation is in fact the continuation of a long history of engagement. Despite the active debate among scholars about Sino-African agricultural relations on the question of land grabbing, very little attention was paid to how disseminating Chinese agricultural technologies in Africa relates to the shifting dynamics of the global food landscape. Food studies literature tends to project the historic tendencies of Western opportunism in Africa onto contemporary dynamics of Sino-African affairs – leading to claims that China is neo-colonial and grabbing land. In countering these claims, Sino-African specialists orient their findings on a case-by-case basis, and argue that China’s presence in Africa is too small to make a considerable difference in Africa’s rural sector. The back and forth between these two narratives has ultimately been unproductive when trying to draw conclusions about the current relationship between China, Africa, and the politics of global food and agriculture. In this thesis, I aim to resituate the debate on Sino-African agricultural partnerships to consider it as part of the changing global food system. To do so, I ask a question that is seldom presented in existing literature: Why is it that African countries are keen to articulate with China in their own agricultural development? This seemingly simple question helps to bridge the gap between the opposing positions on Sino-African agricultural relations as it engages African countries on how they make decisions in determining their own agricultural trajectory. It also explores what it is that China offers in agricultural development from the perspective of those that it partners with. The study is based on two Sino-African agricultural technology demonstration centres that were born out of the Forum on China Africa Cooperation summit in 2006. In asking this question, I arrive at three main conclusions. First, I find that China’s agricultural technologies are relatively easy to adopt in the rural African setting, and that building partnerships with China offers a window of opportunity for African countries to determine their own developmental trajectory. Second, I find that the Sino-African agricultural development centres allow the Chinese companies that run them preferential access to local markets. Third, I find that the relationship is not without its problems, and its impact should not be inflated, as it ultimately remains a work in progress.