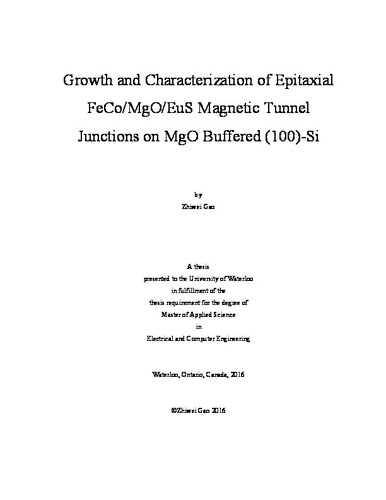 In the last few decades, due to the dramatic improvement of the TMR (tunneling magnetoresistance) effect in MTJs (Magnetic Tunnel Junctions), the data storage industry has been revolutionized. There are so many applications based on this technology, e.g.: read head in hard disk drives; magnetic sensors, etc., while its most advanced application nowadays is on the Magnetoresistive Random Access Memory (MRAM), a type of nonvolatile, high speed, high density, yet low power consumption memory - often termed the “universal memory” [1]. For most applications, magnetic tunnel junctions are fabricated with thin film technologies. In industry, they are mostly deposited by magnetron sputtering for mass production purposes. While in research laboratories, MBE (Molecular Beam Epitaxy), PLD (Pulsed Laser Deposition), and E-beam (Electron beam physical vapor deposition) are often used to deposit well-controlled, high quality layers. The very core component of an MRAM cell is an MTJ, which possesses the desired TMR effect. An MTJ basically consists two ferromagnetic materials separated by a thin insulator. Typically, the connection across the insulating layer is what we call a junction, and the layer is usually a few nanometers thick, which ensures that the junction is thin enough to let the electrons tunnel from one side of the insulator to the other. This is a purely quantum mechanical phenomenon and will be forbidden in classical physics because classically an insulator cannot conduct. In this thesis, we demonstrated the epitaxial growth of the tunnel junctions FeCo/MgO/EuS/Ti on MgO-buffered Si (100) wafers, and showed that TMR in these junction reaches up to 64% at 4.2K. We also discovered how different thicknesses of MgO and measurement temperatures affect the TMR of these junctions. We then optimized the growth conditions of the junctions, and used XPS (X-Ray Photoelectron Spectroscopy) to analyze their chemical characteristic features. The best TMR occurring at 1nm MgO thickness is a result of the competition between symmetry enhancement through MgO, and thickness induced multistep hopping.