Foraging for Meaning: Harvesting Wild Plants as the Basis for an Ecological Worldview 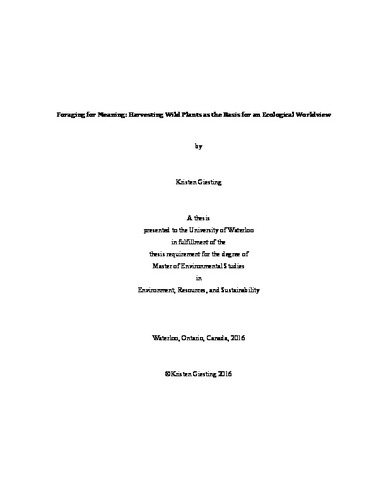 Redeveloping a meaningful connection between people and the Earth may serve to heighten our ecological awareness, foster environmental values, and promote a more sustainable cultural worldview. Various environmental literatures, such as Deep Ecology, have suggested this, but seldom provide specific strategies for practical application. The present study seeks to address this gap by providing a concrete strategy for fostering an improved relationship between people and planet. Foraging, the collection and harvest of wild plant foods, was explored as one potential avenue for establishing a meaningful reconnection to nature, which could serve to shift our cultural values toward preservation rather than destruction of the biosphere. The modern era is characterized not only by ecological disconnection, but social and psychological rifts as well. In our individualistic, deracinated society, we strive to find meaning through wealth, status, and consumer culture; this phenomenon serves to undermine our planetary support system by promoting unsustainable levels of energy and resource throughput. In order to maintain the planet as a suitable home for ourselves, future generations, and other life forms, we must strive to enact a new worldview based upon ecological values which are equally capable of meeting our psychological needs for meaning. However, mainstream environmental messages have failed to promote the necessary paradigmatic societal shifts. Renewable energy and hybrid vehicles, for example, cannot substantially alter the course of our society; instead, we must address the problematic aspects of our core cultural values, particularly the dualistic notion of humans as separate from nature, which is considered a root of modern environmental problems. Interviews and surveys were conducted with foragers at two wild food weekend events in the United States, in order to characterize this understudied population and to determine how foraging might promote a heightened ecological conscience. The data analysis revealed that foragers experience a sense of connection with the Earth, which is built through deep observation and direct interaction with surrounding ecosystems; consuming food produced by nature provides the ultimate connection between people and land. An awareness of and connection to the natural world, built upon direct experience, contributes to a sense of ecological belonging; by re-envisioning humanity’s role in nature, foragers are able to reject and move beyond the modern dualism which typically prevents a fully embedded conception of people as part of nature. By redefining this relationship, foraging allows for an understanding of the value of land and our complete dependence upon it, encouraging values of care and protection. Foragers also described this connection with the Earth as having spiritual qualities; finding meaning within nature indicates the possibility for meeting psychological needs in an ecologically benign manner, and provides hope for an ecological worldview. Based on these findings, further research is recommended to determine how involvement in foraging might impact those who are ambivalent toward nature and lack ecological values. If foraging is found to be impactful for the general population, then it seems likely that promoting this activity on a larger scale could contribute to a positive shift toward a collective ecological conscience and should be encouraged, in a sustainable manner, as a new form of environmental message.