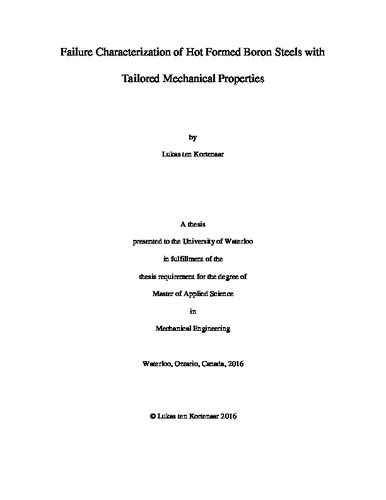 This thesis presents the results from characterization of the failure behaviour of hot stamped USIBOR® 1500-AS steel sheet with tailored properties. A phenomenological approach is used in which failure strain is characterized as a function of stress state and as-hot stamped condition, based on the results of an extensive experimental campaign. A range of material quench conditions are investigated, resulting in a multitude of material microstructures. Considering the framework for tailored hot stamping using in die heating to achieve different material responses, six different material quench conditions were considered in this work, ranging from fully martensitic (Vickers microhardness of 485HV) to a mixed ferrite-bainite microstructure (185HV). Four of the material quench conditions investigated were produced using laboratory equipment, while the remainder were obtained from tailored axial crush components that were quenched with die temperatures of 400 and 700 °C. Miniature shear, butterfly, hole expansion, hole tensile, and hemispherical dome tests were developed for fracture characterization of sheet metal and digital image correlation (DIC) techniques were used extensively in order to obtain fracture strains and strain paths for the different experiments. Notched tensile specimens were also tested, however these specimens were not used for fracture characterization, due to their non-proportional loading paths and indeterminate fracture locations. Considering fracture strain to be a function of stress state and assuming the material investigated in this work to be isotropic and von Mises yielding, the equivalent strain at fracture and stress triaxiality of each experiment was determined from DIC-measured major and minor strains. Fracture loci were then calibrated for different material quench conditions. The validity of the experimental fracture locus was probed using a number of non-proportional loading experiments, in which specimens were initially pre-strained in equi-biaxial tension, before being subjected to loading states of simple shear or uniaxial tension. Additionally, work was done to adapt and apply the experimental fracture loci to impact simulations of hot stamped components with tailored properties, requiring development of “model dependent fracture loci”. There was found to be an inverse relationship between material hardness and measured fracture strain, with the fully martensitic material quench condition (485HV) possessing the lowest ductility, while the greatest fracture strains were measured in the samples produced through die quenching at 700 °C (185HV). For the range of material conditions considered, the lowest fracture strains corresponded to a plane strain loading condition, while the fracture strains measured in simple shear were considerably greater. The material quench conditions, ordered in increasing ductility, are as follows (fracture strains for simple shear and plane-strain tension included in parentheses): fully martensitic (0.54, 0.15), intermediate forced air quench (0.68, 0.22), fully bainitic (0.90, 0.36), 400 °C die quench (1.01, 0.38), and 700 °C die quench (1.05, 0.44).