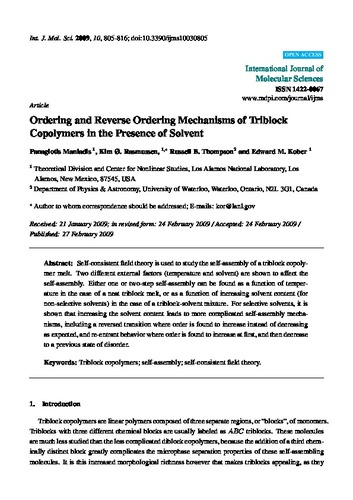 Ordering and Reverse ordering mechanisms of triblock copolymers in the presence of solvent.pdf (546.2Kb)

Self-consistent field theory is used to study the self-assembly of a triblock copolymer melt. Two different external factors (temperature and solvent) are shown to affect the self-assembly. Either one or two-step self-assembly can be found as a function of temperature in the case of a neat triblock melt, or as a function of increasing solvent content (for non-selective solvents) in the case of a triblock-solvent mixture. For selective solvents, it is shown that increasing the solvent content leads to more complicated self-assembly mechanisms, including a reversed transition where order is found to increase instead of decreasing as expected, and re-entrant behavior where order is found to increase at first, and then decrease to a previous state of disorder.