The Design of Intervention Trials Involving Recurrent and Terminal Events 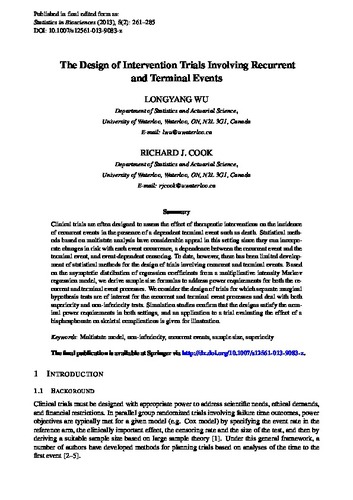 Clinical trials are often designed to assess the effect of therapeutic interventions on the incidence of recurrent events in the presence of a dependent terminal event such as death. Statistical methods based on multistate analysis have considerable appeal in this setting since they can incorporate changes in risk with each event occurrence, a dependence between the recurrent event and the terminal event, and event-dependent censoring. To date, however, there has been limited development of statistical methods for the design of trials involving recurrent and terminal events. Based on the asymptotic distribution of regression coefficients from a multiplicative intensity Markov regression model, we derive sample size formulas to address power requirements for both the recurrent and terminal event processes. We consider the design of trials for which separate marginal hypothesis tests are of interest for the recurrent and terminal event processes and deal with both superiority and non-inferiority tests. Simulation studies confirm that the designs satisfy the nominal power requirements in both settings, and an application to a trial evaluating the effect of a bisphosphonate on skeletal complications is given for illustration.