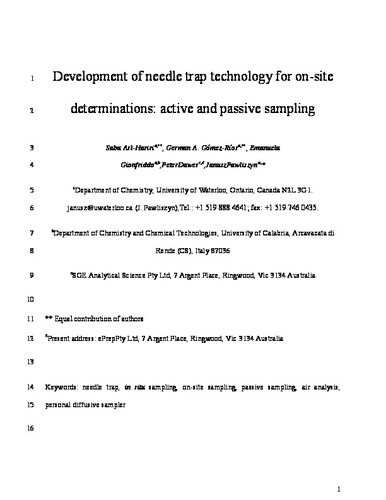 This study presents a thorough evaluation of new prototypes of extended tip needle trap devices (NT), as well as their application to in situ sampling of biological emissions and active/passive on-site sampling of indoor air. A new NT prototype was constructed with a side hole above the sorbent and an extended tip that fits inside the restriction of the narrow neck liner to increase desorption efficiency.New prototype needles were initially packed with divinylbenzene particles at SGE Analytical Science for the purpose of studying biogenic emissions of pine trees. Prior to their final application, they were evaluated in terms of robustness after multiple use (n ˃ 10), as well as amount extracted of volatile organic compounds (VOCs). An ANOVA test for all the probes showed that at a 95 % level of confidence, there were not statistical differences observed among the 9 NTs tested. In addition, the needles were also packed in laboratory with synthesized highly cross linked PDMS as a frit to immobilize carboxen (Car) particles for spot sampling. For passive sampling, the needles were packed with Car particles embedded in PDMS in order to simplify calculations in passive mode. The use of NTs as spot samplers, as well as a passive sampler under controlled conditions in the laboratoryyielded a relative standard deviation of less than 15 %. Finally, a new, reusable and readily deployable pen-like diffusive sampler for needle traps (PDS-NT) was built and tested. Application of the PDS-NT in combination with NT-spot sampling towards the analysis of indoor air in a polymer synthesis laboratory showed good agreement between both techniques for the analyte studied, yielding averages of 0.03 ng/mL and 0.025 ng/mL of toluene, respectively.