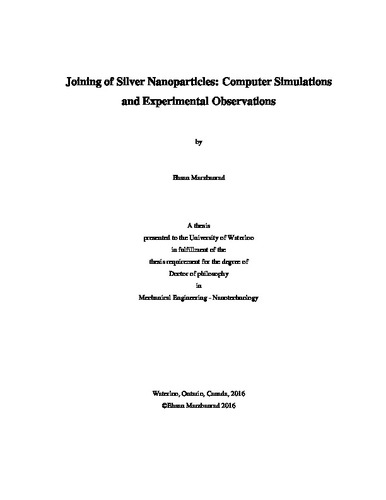 Abstract This dissertation introduced a new type of high aspect ratio silver nanoparticle, synthesized by assembly and joining of hexagonal and triangular nanoplates. The synthesis procedure is a simple mixing at room temperature of silver nitrate solution with ascorbic acid and PMAA solution. After mixing, the synthesis starts from reduction of silver ions, leading to nucleation of silver crystals. Growth of the nucleated crystals in presence of capping agent produces thin hexagonal and triangular nanoplates. These nanoplates assemble and join to make one-dimensional segments. This process continue through assembly of the segments to form one- or two-dimensional supercrystals, the configuration of which is controlled by experimental condition such as silver content of the reactor, nitrate ion content, and pH. The introduced synthesis method answers one of the major questions that motivated this research: Finding a simple, feasible, high-yield, low-cost, and mass producible high aspect ratio silver nanoparticles for using as nanofiller in hybrid electrical conductive adhesives and for various other industrial applications. SEM observation reveals that final thickness of the synthesized nanoparticles are around 25 nm, while the other sides are bigger, even up to 100 µm length nanobelts. TEM and XRD demonstrate that the synthesized nanostructures exhibit a (111) crystal texture on their broad surface, inherited from their nanoplatelet structural blocks. One- and two-dimensional silver nanoparticles with (111) surface plane on this scale is a unique material that has not reported before this research. Molecular dynamics simulation reveals that the nanoplates join together to produce a perfect crystal at the formed joint. The simulation results are confirmed by high-resolution TEM observation. This is another important feature of the synthesized nanocrystals that provide unique properties such as good electrical conductivity. Another important property of the synthesized material is high thermal stability, which originates from the (111) crystal texture surfaces being composed of low-energy and high-stability atoms, compared to the surfaces of other silver nanoparticles. This stability is confirmed by molecular dynamics simulation and experimentation, with comparison to pentagonal silver nanowires with (100) surface crystals. This high thermodynamic stability of the synthesized silver nanoparticles raises the working temperature limit of silver nanoparticles by several hundred degrees over that of the competing nanoparticles. In addition to application of the synthesized 1-D high aspect ratio silver nano particles as nanofiller for enhancing electrical properties and reducing the cost of the hybrid electrical conductive adhesive, the synthesized 2-D silver nanosheets were employed as the primary functional material to fabricate an airflow sensor. The fabricated sensor was examined for detecting low airflows (below 5 ml/min). The sensor shows a linear and repeatable response to airflow in the range of experiment. Simple sensor fabrication method, high electrical stability and excellent atmospheric corrosion resistance of silver nanosheets at working temperature of the sensor (120˚C) are other outstanding features of the synthesized silver nanostructures that make them good candidate for future research. Looking at the thermal behaviour of silver nanoparticles a traditional question is raised about the hypothesized existence of a liquid layer on the surface of silver nanoparticles, called “surface premelting” in the literatures. Molecular dynamic simulation was employed to investigate the phenomenon. This thermodynamic investigation uncovered that by increasing temperature, thermal phonons become potent enough to overcome the cohesive energy of the surface atoms, throwing atoms from their lattice positions to create stable surface defects. Accumulation of defects, which is temperature dependent, is able to create a solid disordered-phase layer covering the nanoparticle surface. Existence of this disordered layer was confirmed in the literature, although it is interpreted as liquid layer in some reports. Investigation into the physical state of this disordered surface layer uncovered that it exists as an amorphous solid, which remains solid until melting temperature, and that the melting of the nanoparticle happens at a constant temperature: a usual melting based on classical thermodynamics. This finding contradicts the predicted behavior of the literature’s “surface pre-melting” phenomena, providing an alternative answer to a traditional question that has been asked in this field of science since the 1940s.