Investigation of the Performance of an Anaerobic Membrane Bioreactor in the Treatment of Mixed Municipal Sludge Under Ambient, Mesophilic and Thermophilic Operating Conditions 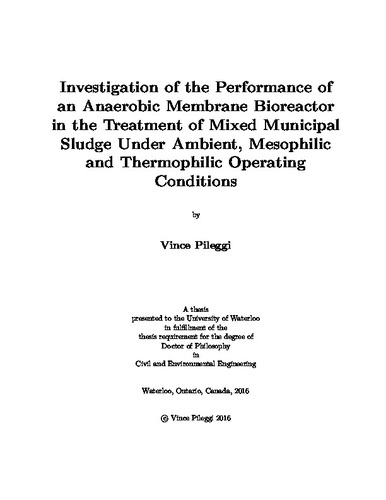 Anaerobic membrane bioreactors (AnMBRs) may provide a sustainable treatment technology for the digestion of mixed municipal sludge based on their ability to achieve elevated volatile solids (VS) conversion and a net positive energy balance. However, AnMBRs may have throughput limitations particularly when operated at high solids inventories due to membrane fouling. This study characterized the anaerobic digestion bioprocess and the membrane performance under various operating conditions and identified the foulant mode using the classical ‘Hermia-Field’ blocking models while operating the system under low crossflow and low transmembrane pressures. Using the in-vitro yeast estrogen screen (YES) bioassay the sludge and permeate quality was assessed for its estrogenic potential. The permeate was analysed for a group of environmentally relevant trace organic compounds. The study used a side-stream pilot scale AnMBR with two parallel negative tubular membranes and a flow through anaerobic digester (AD) as a control. Each reactor was fed in parallel from a common mixed sludge source. The tubular ultrafiltration membranes were polyvinylidene difluoride based with a nominal pore size of 20 nm, operated at a crossflow of 1–1.2 m/s and a transmembrane pressure of 34–54 kPa. Four operating conditions that included different SRT:HRT ratios under ambient (25 C), mesophilic (35 C) and thermophilic (55 C) temperatures were investigated. The main AnMBR advantage over the AD is the ability to decouple and independently control the system SRT and HRT resulting in increased throughput, at lower HRT, while maintaining a low food to microorganisms ratio by increasing the SRT. This operational strategy was used and under mesophilic conditions, the AnMBR showed a 54 and 64 % volatile solids conversion at SRT:HRT of 30:15 and 21:7 days, with loading rates of 2.1 ± 0.4 and 3.7 ± 0.9 kg COD/m3 · d, respectively. Under ambient and thermophilic operating conditions, the SRT/HRT ratio was adjusted considering the system kinetics and the AnMBR showed a 49 and 55 % volatile solids conversion at SRT/HRT of 40:8 and 22:7 days, with loading rates of 3.5 ± 0.4 and 3.4 ± 0.8 kg COD/m3 · d, respectively. Under all the operating conditions the AnMBR was operated at more than double the loading rate and showed an improvement of 13–30 % increase in volatile solids conversion, compared to the AD. A comparison of the energy balance between the AnMBR and AD showed a net positive energy balance for the AnMBR when operated at mesophilic and ambient temperatures but not during thermophilic operation. The AD proved sustainable under ambient operation only. The membrane performance showed a median sustainable flux of 6–7 ± 2 LMH which was maintained through inter-permeation cycle rest and clean-in-place (CIP) strategy. The frequency of the CIP increased with an increase in SRT, TS and during ambient operation due to an increase in viscosity of the mixed liquor. The dominant fouling mode was found to be cake fouling under all operating conditions and primarily of a reversible type. The permeability decline was assessed and found to be affected primarily by TS, SRT/HRT ratio and extracellular polymeric substances (EPS) protein to polysaccharide ratio. The estrogenicity of the feed sludge was found to persist in anaerobically treated mixed municipal sludges and the AnMBR permeate. This was corroborated by the permeate chemical analysis which found a significant contribution from a small number of estrogens.

Vincenzo Pileggi (2016). Investigation of the Performance of an Anaerobic Membrane Bioreactor in the Treatment of Mixed Municipal Sludge Under Ambient, Mesophilic and Thermophilic Operating Conditions. UWSpace. http://hdl.handle.net/10012/10272