THE PHILOSOPHICAL SIGNIFICANCE OF QUINE'S D-THESIS 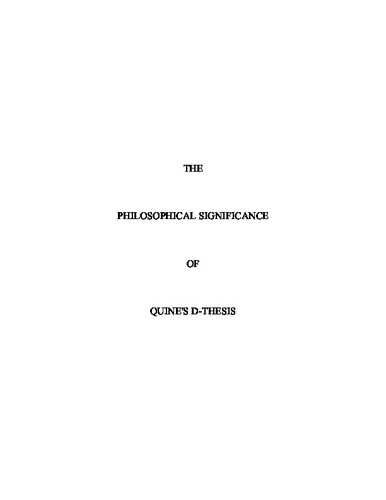 The philosophical significance of Quine's D-thesis is considered. The D-thesis - "Any statement can be held true come what may, if we make drastic enough adjustments elsewhere in the system? (W.V.0. Quine, From a Logical Point of View, p. 43) - named for Pierre Duhem, marked a significant turning point in the evolution of Quine's thoughts on epistemology. A brief survey of Quine's epistemological work is presented to show the evolution of his thought. Adolf Grünbaum's criticisms are examined and it is shown that the D-thesis can be defended from Grünbaum's attacks. Writings of Harry Frankfurt and Philip Quinn are considered in this context. Using some ideas due to Israel Scheffler, we are able to show that a D-theorist can avoid the subjectivist's problems. We conclude that the D-thesis is worthy of consideration as a possible basis for a philosophy of science.