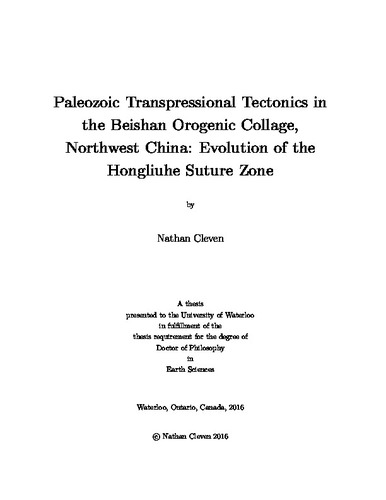 The Beishan orogenic collage is a southern, central subset of the Central Asian Orogenic Belt, in Northwest China. It is an accretionary orogen that was active during the early Paleozoic, transitioning to convergent collisional tectonics in the late Paleozoic to early Mesozoic. It comprises two main early Paleozoic arcs built through Precambrian pericratonic fragments, the Hanshan and Dundunshan terranes. Detrital zircon geochronology indicates that they share a similar set of Precambrian ages with the Tarim craton. It also establishes that the Hanshan arc developed with magmatism from the Late Cambrian to Early Devonian, then re-initiated with a minor peak of magmatism in the Carboniferous–Permian. Magmatism in the Dundunshan arc follows an identical pattern, yet offset younger by roughly 50 m.y. in all aspects. We interpret this pattern to indicate a staged collision and accretion event, the docking of the arcs from north to south. The event initiated during a regional magmatic hiatus in the Devonian. Known ophiolite ages of genesis and emplacement respectively bracket the main arc-building magmatic period. This supports conclusions that an ophiolite belt in the Beishan does represent a suture. Deformation in the Mazongshan terrane, the central Beishan suture and accretionary complex, is due to episodes of early Paleozoic accretion of arcs, oceanic units, and ophiolite emplacement. To further establish the sequence of tectonism we provide an age and tectonic setting of the Hongliuhe ophiolite, one of the oldest that now lies in the suture zone. It comprises cumulate ultramafic to mafic plutonic rocks formed in the Cambrian (520.3 ± 5.8 Ma, U-Pb, Gabbro). Volcaniclastic and arc-marginal sedimentary rocks overlie exposed ductilely deformed lower crustal ophiolitic plutonic rocks. Petrography, lithostratigraphy, and whole rock and mineral chemistry support a conclusion that the ophiolite developed in an extensional arc-marginal supra-subduction tectonic environment. This illustrates how ophiolites can be created during subduction rollback, not necessarily subduction initiation. The emplacement timing of the ophiolite is constrained by an undeformed Early Devonian granite (413.6 ± 3.5 Ma, U-Pb) that intruded through its tilted, folded sedimentary cover sequence. Paleozoic deformation spanning the Mazongshan terrane can be differentiated into two events: pervasive Silurian–Devonian dextral transpression and Permian–Triassic sinistral transpression. We identify that a protracted regional accretion or collision event produced the early deformation. U-Pb zircon ages define a staged cessation of deformation from five late-syn-kinematic dykes in the Xingxingxia region (436.5 ± 2.6 Ma to 383.1 ± 4.6 Ma, Early Silurian–Middle Devonian). High strain zones distributed throughout the accretionary complex exhibit dextral kinematics, with transpressive fault dynamics. Narrow fault width and high variation of stretching lineation orientations within the foliation plane together correlate to earlier timing of fault cessation. Wide fault zones bounding the accretionary complex have focused lineation orientations and correlate to later cessation. This pattern of fault cessation indicates a progressive increase in localization of strain over time, due to a possible combination of uplift, cooling (cessation of magmatism), and waning tectonism; each of these mechanisms can be characteristically linked to collision. The dextral transpressive event is likely the collision of the northern and southern arc terranes of the Beishan and spanned the Silurian to Middle Devonian. The timing correlates to the emplacement of ophiolites within the suture. To aid analysis of highly tectonized regions, we present a new detrital geochronology provenance analysis technique dating populations of variably tectonized conglomerate clasts. Bulk samples of clasts are sorted based on their degree of internal deformation into three subsets: undeformed, deformed, and intermediate, or slightly deformed. Zircon from each population is analyzed identically to a standard sandstone detrital geochronology sample. Our application of the method to the Hongliuhe Formation, a Permian syn-orogenic deposit overlying the Mazongshan accretionary units, compares clast and sandstone data sets at three stratigraphic levels. Clast population age spectra include a wider range of ages than sandstone. They indicate a minimal lag time, implying rapid exhumation rates. A dominant Ordovician magmatic peak is present in sandstone data, switching to a dominant Silurian–Devonian peak in clast data, indicating a younging of magmatism towards a proximal provenance. A hiatus of magmatism starts in the Devonian, correlating with the latest age of deformed clasts, interpreted as timing of collisional tectonics. The detailed age spectra provide regional tectonic context and interpretation of processes, as well as more robust provenance interpretation than could be determined from sandstone samples alone.