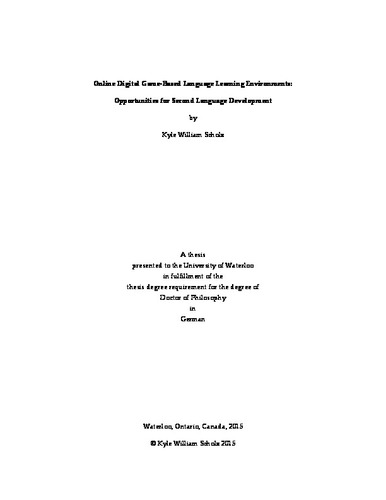 This dissertation project is an analysis of the language learning processes of 14 learners playing in and interacting with the massive multiplayer online role-playing game (MMORPG) World of Warcraft (WoW) in German in order to determine how second language development (SLD) emerges. The data for this study was collected from the in-game experiences and out-of-game conversations of students at the University of Waterloo over the course of four months. Participants were asked to play the game in an extramural setting without any instructor intervention; the only stipulation was that each participant played a minimum of 10 hours. Three times throughout the course of the study, participants met in small focus groups to discuss their gameplay experiences in German. By doing so, the near transfer of linguistic constructions from the gaming context to the out-of-game environment could be observed as evidence of SLD. A complex adaptive systems (CAS) theoretical framework was employed to analyze the language learning and gameplay trajectories of the learners. All language that was observed and produced was recorded and transcribed in order to determine to what extent the transfer occurs while playing WoW, and which type of language learner and approach to gameplay is optimally suited for extramural digital game-based language learning (DGBLL). Pairwise comparisons were conducted for which eight participants were studied in detail. Each individual’s gameplay and language learning experience resulted in the computation of an efficacy score, representing how much linguistic growth occurred relative to the amount of language production that each individual contributed in the in-person or online conversations. By analyzing the efficacy of the learners’ trajectories through a retrodictive qualitative modeling methodology, whereby the process of analysis is reversed so that the outcomes of the system are considered first, each learner’s SLD is traced back to determine which factors and experiences emergent in DGBLL influenced change and growth. The results of this study position MMORPGs as well-suited for SLD in extramural contexts so long as learners are given the opportunity to communicate about the game with fellow players or language learners. If this condition is met, and individuals are given the opportunity to experience the game at their own pace, learners are able to successfully transfer linguistic constructions from the gaming context to the out-of-game environment. Fundamentally, the analysis of these results reveals that due to gameplay and language learning trajectories being nonlinear, a CAS conceptualization of gameplay for SLD purposes is necessary to understand the many factors and influences which lead to development and change within the system. Each learner’s efficacy score proves to be a valuable means by which to gauge the SLD of each learner over the course of the gameplay experience, suggesting that certain factors, such as the amount of time spent playing the game, and the learner’s previous experience learning languages and its relation to his or her rationale for studying German, are worth researching in order to best understand the growth conditions which will lead to SLD in DGBLL.