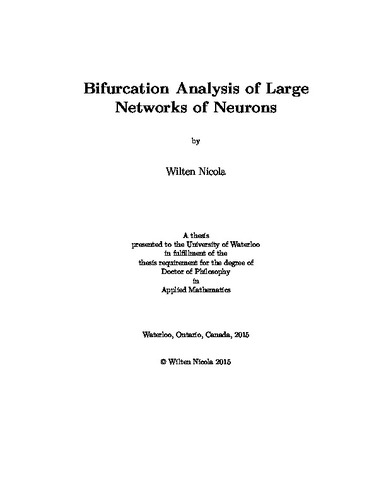 The human brain contains on the order of a hundred billion neurons, each with several thousand synaptic connections. Computational neuroscience has successfully modeled both the individual neurons as various types of oscillators, in addition to the synaptic coupling between the neurons. However, employing the individual neuronal models as a large coupled network on the scale of the human brain would require massive computational and financial resources, and yet is the current undertaking of several research groups. Even if one were to successfully model such a complicated system of coupled differential equations, aside from brute force numerical simulations, little insight may be gained into how the human brain solves problems or performs tasks. Here, we introduce a tool that reduces large networks of coupled neurons to a much smaller set of differential equations that governs key statistics for the network as a whole, as opposed to tracking the individual dynamics of neurons and their connections. This approach is typically referred to as a mean-field system. As the mean-field system is derived from the original network of neurons, it is predictive for the behavior of the network as a whole and the parameters or distributions of parameters that appear in the mean-field system are identical to those of the original network. As such, bifurcation analysis is predictive for the behavior of the original network and predicts where in the parameter space the network transitions from one behavior to another. Additionally, here we show how networks of neurons can be constructed with a mean-field or macroscopic behavior that is prescribed. This occurs through an analytic extension of the Neural Engineering Framework (NEF). This can be thought of as an inverse mean-field approach, where the networks are constructed to obey prescribed dynamics as opposed to deriving the macroscopic dynamics from an underlying network. Thus, the work done here analyzes neuronal networks through both top-down and bottom-up approaches.