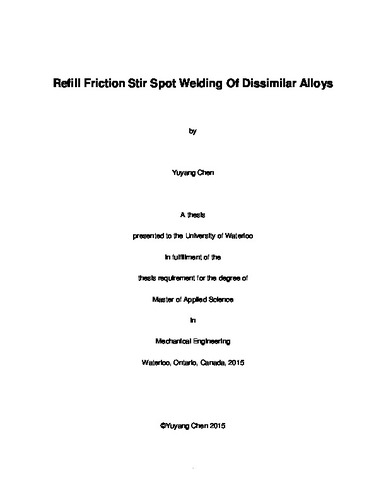 Lightweight alloy materials such as magnesium and aluminum alloys are frequently employed in the automotive and manufacturing industry in order to improve vehicle fuel economy. This creates a pressing need for joining of these materials to each other, as well as to steels. Given the drastic difference in thermal and mechanical properties of these materials and the limited solubility of aluminum or magnesium in steel, dissimilar alloy fusion welding is exceptionally difficult. Refill friction stir spot welding (RFSSW) is a solid-state joining technology which connects two materials together with minimal heat input or distortion. The RFSSW process involves a three-piece non-consumable tool with independently controlled sleeve and pin components, which rotate simultaneously at a constant speed with the sleeve penetrating into only the top sheet. Joining of Al 5754 alloy and DP 600 plate using friction stir seam welding is investigated. Two travel speeds of the shoulder are used to compare the mechanical and microstructural properties of the two kinds of welds made. Scanning electron microscopy (SEM) and optical microscopy are utilized to characterize the microstructure. Mechanical properties are evaluated using tensile testing. Joining of Al 6063-T6 and Zn coated DP 600 steel using RFSSW is studied. Spot welds could reach a maximum overlap shear load of 3.7 kN when using a tool speed of 2100 RPM, a 2.5 s welding time and 1.1 mm of penetration into the upper Al 6063 sheet. Scanning electron microscopy (SEM) and energy-dispersive X-ray spectroscopy (EDX) were conducted to characterize the interface, which revealed that zinc layer was displaced into the interface and upper sheet, which may facilitate the bonding between the two sheets. Microhardness measurements reveal that the fracture path propagates through the soft heat affected zone of the Al alloy during overlap shear testing. Joining of Mg alloys ZEK with Zn coated DP 600 steel sheets by RFSSW is also studied here. In joints between ZEK 100 and DP 600, the maximum overlap shear fracture load is 4.7 kN, when a 1800 RPM tool speed, 3.0 s welding time and 1.5 mm penetration into the upper ZEK 100 sheet is applied. SEM and transmission electron microscopy (TEM) revealed that a continuous layer of FeAl2 particles accommodate bonding of the ZEK 100 and DP 600 sheets, which appears to have originated from the galvanized coating on the DP 600. If the zinc layer is removed then the maximum overlap shear fracture load is 3.1 kN. X-ray diffraction analysis of the interface between the Mg alloy and the DP 600 steel on the Mg side also revealed that intermetallic (IMCs) such as FeAl2 existed as an interfacial layer between the two sheets. It can be revealed from the displacement curve that the absorbed energy of the weld made under the condition of 1800 RPM, 3.5s, and 1.5mm of plunge depth in tensile testing up to failure point is approximately 2.73J.