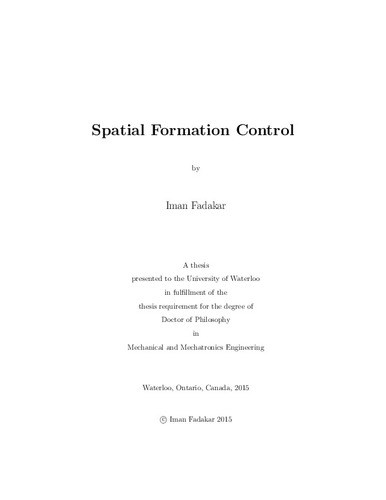 In this thesis, we study robust spatial formation control from several aspects. First, we study robust adaptive attitude synchronization for a network of rigid body agents using various attitude error functions defined on SO(3). Our results are particularly useful for networks with large initial attitude difference. We devise an adaptive geometric approach to cope with situations where the inertia matrices are not available for measurement. We use the Frobenius norm as a measure for the difference between the actual values of inertia matrices and their estimated values, to construct the individual adaptive laws of the agents. Compared to the previous methods for synchronization on SO(3) such as those which are based on quaternions, our proposed approach does not contain any attitude representation ambiguity. As the final part of our studies from the attitude synchronization aspect, we analyze robustness to external disturbances and unmodeled dynamics, and propose a method to attenuate such effects. Simulation results illustrate the effectiveness of the proposed approach. In the next part of the thesis, we study the distributed localization of the extremum point of unknown quadratic functions representing various physical or artificial signal potential fields. It is assumed that the value of such functions can be measured at each instant. Using high pass filtering of the measured signals, a linear parametric model is obtained for system identification. For design purposes, we add a consensus term to modify the identification subsystem. Next, we analyze the exponential convergence of the proposed estimation scheme using algebraic graph theory. In addition, we derive a distributed identifiability condition and use it for the construction of distributed extremum seeking control laws. In particular, we show that for a network of connected agents, if each agent contains a portion of the dithering signals, it is still possible to drive the system states to the extremum point provided that the distributed identifiability condition is satisfied. In the final part of this research, several robust control problems for general linear time invariant multi-agent systems are studied. We consider the robust consensus problem in the presence of unknown Lipschitz nonlinearities and polytopic uncertainties in the model of each agent. Next, this problem is solved in the presence of external disturbances. A set of control laws is proposed for the network to attain the consensus task and under the zero initial condition, achieves the desired H-infinity performance. We show that by implementing the modified versions of these control laws, it is possible to perform two-time scales formation control.