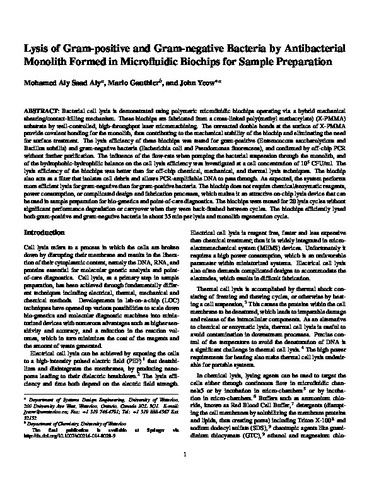 Bacterial cell lysis is demonstrated using polymeric microfluidic biochips operating via a hybrid mechanical shearing/contact killing mechanism. These biochips are fabricated from a cross-linked poly(methyl methacrylate) (X-PMMA) substrate by well-controlled, high-throughput laser micromachining. The unreacted double bonds at the surface of X-PMMA provide covalent bonding for the formation of a porous polymeric monolith (PPM), thus contributing to the mechanical stability of the biochip and eliminating the need for surface treatment. The lysis efficiency of these biochips was tested for gram-positive (Enterococcus saccharolyticus and Bacillus subtilis) and gram-negative bacteria (Escherichia coli and Pseudomonas fluorescens) and confirmed by off-chip PCR without further purification. The influence of the flow rate when pumping the bacterial suspension through the PPM, and of the hydrophobic-hydrophilic balance on the cell lysis efficiency was investigated at a cell concentration of 105 CFU/mL. It was shown that the contribution of contact killing to cell lysis was more important than that of mechanical shearing in the PPM. The biochip showed better lysis efficiency than the off-chip chemical, mechanical, and thermal lysis techniques used in this work. The biochip also acts as a filter that isolates cell debris and allows PCR amplifiable DNA to pass through. The system performs more efficient lysis for gram-negative than for gram-positive bacteria. The biochip does not require chemical/enzymatic reagents, power consumption, or complicated design and fabrication processes, which makes it an attractive on-chip lysis device that can be used in sample preparation for genetics and point-of-care diagnostics. The biochips were reused for 20 lysis cycles without any evidence of physical damage to the PPM, significant performance degradation, or DNA carryover when they were back-flushed between cycles. The biochips efficiently lysed both gram-positive and gram-negative bacteria in about 35 min per lysis and PPM regeneration cycle.