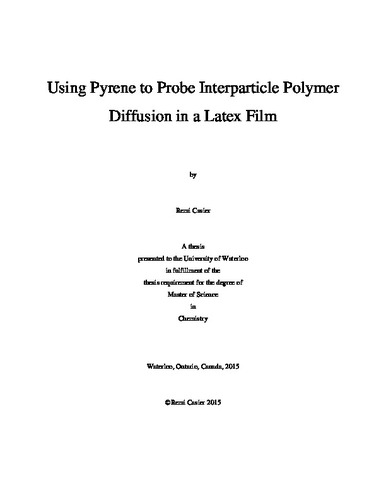 Fluorescence has been used for many years as a powerful analytical tool to probe the formation of films from aqueous latex dispersions. Currently, the most widely used method is fluorescence resonance energy transfer (FRET), which requires the use of two different fluorescently-labelled latex dispersions. As the latex particles coalesce during film formation, the amount of FRET that occurs between the particles is used to probe the level of interparticle polymer diffusion (IPD). Although FRET provides a quantitative method to probe IPD, a simpler method might only require the preparation of a single fluorescently-labelled latex using the dye pyrene. An isolated pyrene excited by a photon of light emits as a monomer. However, if the excited pyrene encounters a ground-state pyrene, it can form an excimer. The amount of excimer formed is directly proportional to the local pyrene concentration (CPy), which may be quantified by steady-state fluorescence with the ratio of the fluorescence intensity of the excimer (IE) over that of the monomer (IM), namely the IE/IM ratio. A mixture of a non-fluorescent latex with a latex consisting of polymers randomly labelled with pyrene will initially have a high CPy, generating lots of excimer and resulting in a high IE/IM ratio. As IPD occurs during film formation, the pyrene-labelled copolymer will diffuse into the surrounding non-fluorescent latex particles lowering CPy, resulting in reduced excimer formation and a decrease in the IE/IM ratio. Since variations in the IE/IM ratio reflect the extent of IPD, the IE/IM ratio was monitored over time to quantitatively describe the IPD of polymer chains between latex particles during film formation. The IE/IM ratio was used to calculate the fraction of mixing (fm) between the latex particles as a function of annealing time and temperature. The colour of the films irradiated by UV light was also monitored to determine whether a discernible colour change was apparent over the annealing process. In turn, fm was used to calculate the apparent diffusion coefficients of the pyrene-labelled copolymer. Lastly, the diffusion coefficients were used to calculate the apparent activation energy of diffusion and the c1 and c2 terms in the WLF equation.