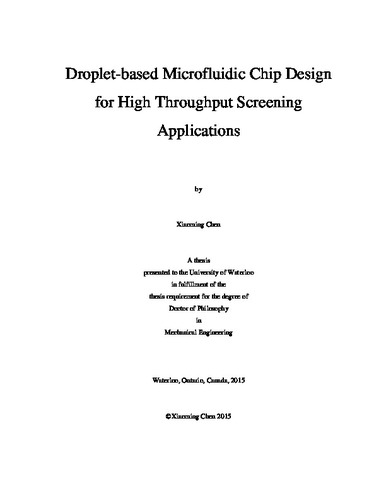 Droplet-based microfluidics has been considered as a prospective tool for high throughput screening analysis, which is highly demanded in a wide range of areas including but not limited to life science research, drug discovery, material synthesis and environmental monitoring. Low sample consumption, reduced reaction time, high throughput manipulation, fast mixing, and prevention of cross contamination at channel walls are just some of the benefits of droplet-based microfluidics. Although extensive research efforts have been reported in the study of droplet-based microfluidics over the past decades, it has yet to be widely commercialized. One of the challenges that limit droplet microfluidic chips from being commercialized is the difficulty in integrating multiple functions robustly without increasing the device footprint. Major functionalities of interest include generating droplets with controlled volume and frequency, and precisely controlling and manipulating each individual droplet such as sorting, detecting, merging, splitting, pairing, mixing, trapping, releasing, long term and short term storing, etc. Since many of these functionalities rely on the accuracy of droplet generation which is the first step, it is crucial to investigate the droplet formation process and understand how to design microfluidic structures to manipulate each individual droplet effectively. To this end, this thesis started with a fundamental study of droplet generation in a flow focusing geometry based on extensive experimental data, from which a physical model was developed to describe droplet formation processes, then move on to study droplet generation in a geometry with two junctions in series, with the goal of improving single encapsulation (one particle per droplet) efficiency. Later, droplet merging towards whole genome amplification and drug screening applications was investigated, and finally a microfluidic chip integrated with multiple functionalities was developed, and its robustness was validated. The first project studied the fundamental principles of liquid-liquid droplet generation in a flow focusing device. This work presents a 3D physical model with less fitting parameters than existing ones. The model describes droplet formation process in flow focusing devices operating in the squeezing regime, where droplet size is usually larger than the channel width, and was developed based on a systematic and extensive experimental study. In particular, it incorporates an accurate geometric description of the 3D droplet shape during the formation process, an estimation of the time period for the formation cycle based on the conservation of mass, and a semi-analytical model predicting the pressure drop over the 3D corner gutter between the droplet curvature and channel walls, which allows droplet size, spacing and formation frequency to be determined accurately. The model takes into account change in channel geometry (height to width ratio), viscosity contrast, flow rate ratio and capillary number with a wide variety. In the second project, liquid-liquid droplet generation in a flow focusing device with two junctions in series was investigated using experimental approach. Extra emphasis was placed on the device’s ability to encapsulate single cell and particle. . This study employs glycerol solutions with different concentrations as the dispersed phase, which tends to form stratified flow at the first junction due to viscosity contrast. The stratified flow proceeds to form droplets in oil stream at the second junction. To obtain a comprehensive understanding of the droplet formation dynamics involving stratified flow, five different scenarios were considered. These include a single stream of 10%glycerol aqueous solution, a single stream of 80%glycerol aqueous solution, as well as the simultaneous flow of multiple streams of the above mentioned solution. Droplet size and formation period for these cases were compared and analyzed considering the same geometric and flow conditions. It is found that stratified flow structure strongly influences droplet formation dynamics such as droplet size and formation frequency and the scenario with 80%glyc surrounded by 10%glyc in the first junction generates the largest droplet size. Each structure finds its own applications. For the purpose of single encapsulation, the scenario with 80%glyc surrounded by 10%glyc in the first junction is most suitable because the high viscosity of 80%glyc allows particles to be focused into a thin stream and spaced out before entering droplets. On the other hand, the scenario with two fluids side by side in the first junction generates droplets with high monodispersity for a larger range of flow ratios, which is useful for high throughput reactions involving different reagents. After understanding the fundamentals of the droplet generation process, several designs for practical use were proposed to generate or manipulate droplets. These designs include: i) a flow focusing device that improve droplet size uniformity through changing junction angle; ii) a system for droplet generation on demand, which is essential to controlling droplets of specific reagents; iii) a geometry for generating droplet pairs with uniform droplet sizes and controlled droplet spacing , and to study the interaction between two nearby droplets; iv) a simple droplet merging chamber for controlled reagent volume; and v) a droplet trapping and releasing on demand system for drug screening. The final part of this thesis presents a complex microfluidic system that integrates multiple functionalities, including droplet generation, pairing, trapping, merging, mixing, and releasing. The criterion of this design was analyzed and verified by experiments. This design does not require any synchronization of droplet frequency, spacing or velocity, which makes the microfluidic chip work robustly, and is controlled entirely by liquid flow eliminating the needs for electrodes, magnets or any other moving parts. This design can be applied to many chemical or biological reactions, such as drug screening, chemical synthesis, and cell culture, etc.