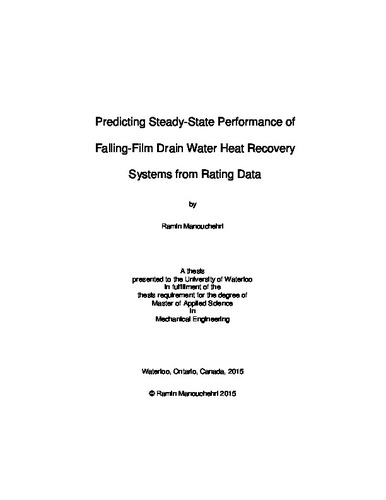 Drain Water Heat Recovery (DWHR) systems are counter-flow heat exchangers typically used to recover energy from warm water going down shower drains. Such systems are becoming commonplace in many residential buildings; however, the lack of reliable building simulation models has proven to be an obstacle when it comes to choosing the most suitable unit for a given application. The ultimate outcome of this thesis is a universal model that uses the existing rating data to predict the performance of DWHR systems operating under various conditions. A test rig was constructed and programmed to measure the performance of DWHR systems in the Solar Thermal Research Laboratory (STRL). Highly accurate instruments were incorporated in the test rig to measure the flow rates, temperatures and pressures at multiple locations. Through experiments, a model was created to predict the performance of DWHR systems operating under equal-flow conditions. A correction factor was developed to allow extrapolating the results of this model to flow rates higher than those available in the rating data. The effects of varying inlet temperatures on the performance of DWHR systems were also found through experiments and a general correction factor was developed to compensate for these effects. A thermal resistor network was created based on the construction of DWHR systems in order to directly compare the theoretical expectations for the effects of temperature with the experimental data. A universal correlation was also devised through experimentation which allows the use of rating data from equal-flow conditions to predict performance of systems operating under unequal-flow conditions. The correlations developed throughout this thesis were compiled into a universal procedure, which was validated through experiments. In all cases, the experimental and predicted results were in good agreement, which lends credibility to the procedure developed in this work.