How Ontario's urban householders manage their ecosystem: A ten-year study in Kitchener-Waterloo 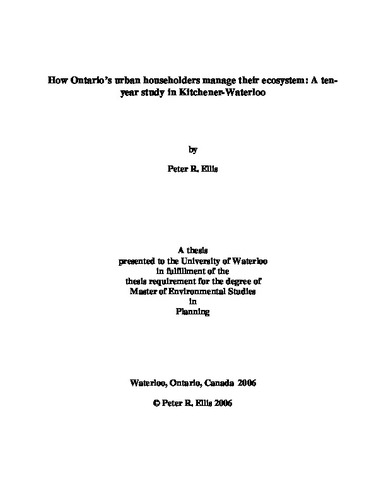 As much of the growing population of North America is accommodated within cities or on their fringes, one needs to understand how these people are managing their private outdoor space. Within the cities of Kitchener and Waterloo, Ontario, Canada a randomly selected set of residential occupancies were surveyed in 1994 and 2004 about their yard landscaping and maintenance practices. Parallel mail-out questionnaires were delivered to more than 1,000 randomly selected addresses in both 1994 and 2004. Approximately 30 percent of surveyed occupancies completed the questionnaire in both years. Over one-third of respondents from both 1994 and 2004 were matched together based on individual, household, or address information. The matched respondent results were used to validate similarities and identify any inconsistencies between survey years. In general, matched respondent trends did not differ substantially from the overall study trends. <br /><br /> This study found that much of the outdoor space on residential properties consists of turfgrass lawn. Lawns were the dominant form of landscaping in both 1994 and 2004. Although respondents' attitudes towards lawns shifted slightly in favour of more gardens in the 2004 survey compared to 1994, respondents' actual landscaping styles and behaviours did not follow suit. Regardless of minor differences in attitudes between survey years, turfgrass was reported to be present in more than 85 percent of respondents' yards. On average, lawns were estimated to cover more than half of respondents' total private outdoor space in both 1994 and 2004. Likewise, more than 60 percent of respondents in both survey years indicated that their yard reflected a monoculture lawn. When compared with five other styles of landscaping, the monoculture lawn was found attractive and well-liked by approximately half the respondents in both survey years. In addition to the prevalence and preference for lawns, lawns were seen as practical to maintain as: the majority of respondents had a lawnmower ? mostly gas-powered; respondents were willing to spend almost $200 a year to water their lawn, on average; the application of chemicals, particularly fertilizers, was common with approximately half the respondents; and more than 40 percent of respondents were willing to pay lawn-care professionals to look after their yards. Lawns were also perceived to be the landscaping style most acceptable to neighbours. Thus, given the ubiquitousness of lawns in urban residential environments, the presence of lawns not only represents the yard design preferences of homeowners, but is part of deeply entrenched societal norms. <br /><br /> With assistance from the media and advertisements, these implicit societal norms were found to influence household attitudes and preferences towards what is dubbed 'lawn-scaping'. As confirmation of these subtle norms, more than 60 percent of respondents in both survey years agreed that 'a yard has to have a lawn'. However, these landscaping norms are also explicitly established in municipal property regulations and lot-maintenance by-laws. Hence, the lawn landscape is implicitly linked with social norms and explicitly articulated in legal agreements, making it the unquestioned standard of landscaping styles. It is concluded that a change in local policies and regulations, along with greater education and awareness, will lay the foundation for more alternative styles of landscaping within urban residential areas.