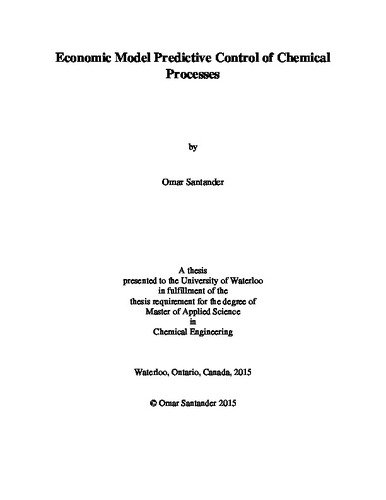 The objective of any chemical process is to transform raw materials into more valuable products subject to not only physical and environmental but also economic and safety constraints. To meet all these constraints in the presence of disturbances the processes must be controlled. Although nowadays there are many available control techniques available Model Predictive Control (MPC) is widely used in industry due to its many advantages such as optimal handling of interactions in multivariable systems and process constraints. Generally, the MPC strategy is implemented within a hierarchical structure, where it receives set points or targets from the Real Time Optimization (RTO) layer and then maintains the process at these targets by calculating optimal control moves. However, often the set point from the RTO may not be the best optimal operation or it may not be reachable thus motivating the integration of the RTO and MPC calculations into one single computation layer. This work focuses on this idea of integrating RTO and MPC into one single optimization problem thus resulting in an approach referred in literature as Economic Model Predictive Control (EMPC). The term “Economic” is used to reflect that the objective function used for optimization includes an economic objective generally used in RTO calculations. In this thesis, we propose an EMPC algorithm which calculates manipulated variables values to optimize an objective consisting of a combination of a steady state and a dynamic economic cost. A weight factor is used to balance the contributions of each of these two terms. Also, the cost is defined such as when the best economic steady state is reached the objective is only influenced by the dynamic economic cost. An additional feature of the proposed algorithm is that the asymptotic stability is satisfied online by enforcing four especial constraints within the optimization problem: 1-positive definiteness of the matrix P defining the Lyapunov function, 2- contraction of the Lyapunov function with respect to set point changes, 3- contraction of the matrix P with respect to time and 4- Lyapunov stability condition. The last constraint both ensures decreasing of the Lyapunov function and also accounts for the robustness of the algorithm with respect to model error (uncertainty). A particular novelty of this algorithm is that it constantly calculates a best set point with respect to which stability is ensured by the aforementioned constraints. In contrast to other algorithms reported in the literature, the proposed algorithm does not require terminal constraints or terms in the cost that penalize deviations from fixed set points that often lead to conservative closed loop performance. To account for unmeasured disturbances entering the process, changes in parameters are also explored and the algorithm is devised to compensate for these changes through parameter updating. Accordingly, the parameters are included as additional decision variables within the optimization problem without the need for an external observer. The stability of the parameters estimation is ensured through the set point constraint mentioned above. To demonstrate the capabilities of the proposed algorithm, it is tested on two case studies: a simpler one involving a system of 4 nonlinear ODEs describing an isothermal nonlinear reactor and a larger problem involving a non-isothermal Williams-Otto reactor with parallel reactions. The dynamics of the latter reactor consists of a set of nonlinear ODE describing the evolution of the process temperature and concentration of the different species. The simulations for the isothermal reactor showed that the proposed algorithm not only outperformed (in terms of an economic function) alternative formulations, but addressed all their limitations. In addition, when there was a parameter modification, this was adapted in a finite time. In terms of the non-isothermal reactor, the simulations demonstrated that not only the best steady state could be computed, but also the states were steered to it satisfying the online stability property.