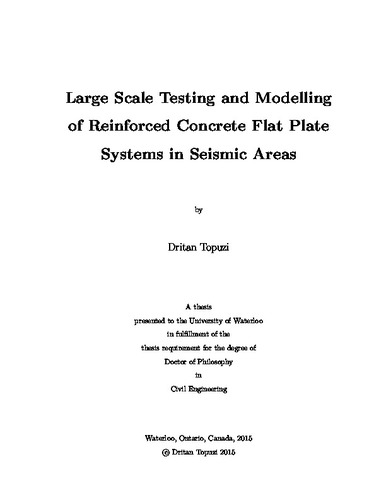 The focus of this research is on developing new punching shear retrofit techniques for slab-column connections to improve the seismic response of flat-plate systems. Previous tests have shown the effectiveness of using shear reinforcement to enhance the shear strength and ductility of individual slab-column connections. However, while ductility reduces the earthquake impact on structures, increased stiffness attracts higher forces. Herein, a new type of punching shear retrofit element, shear bolts with flexible washers, is introduced. The flexible washers allow for shear crack opening during the lateral displacements, while at the same time providing control of the crack width by using the appropriate washer thickness and/or stiffness. A set of six slab-column connections retrofitted with this new type of shear reinforcement was tested. The results show that this technique improves the lateral load-deformation response of the connections, increasing the ductility without a commensurate increase in stiffness. Lower stiffness results in lower shear forces attracted by the column and continuous opening and closing of cracks results in higher energy dissipation through friction within the crack interfaces. The effect of this type of shear reinforcement on the response of an assembled structure is also important. This study investigates such behaviour analytically, using various connection hysteretic responses to check how energy dissipation within individual connections affects the overall energy dissipation of a flat-plate system. Different lateral load supporting systems were investigated to determine the hysteretic response needed at slab-column connections to avoid sudden collapse. This research shows how to achieve the desired characteristics of a flat plate structure subjected to an earthquake - sufficient strength and stiffness to withstand moderate intensity shaking, and sufficient ductility to act in parallel with a more rigid structural system under strong base motions. Such design of slab-column connections is in agreement with the philosophy of ”capacity design”, where the designer ”tells the structure what it should do in the event of a major earthquake”. The presented system was designed for slab retrofit. However, it can be anticipated that similar concepts can be used in the construction of new slabs in seismic zones.