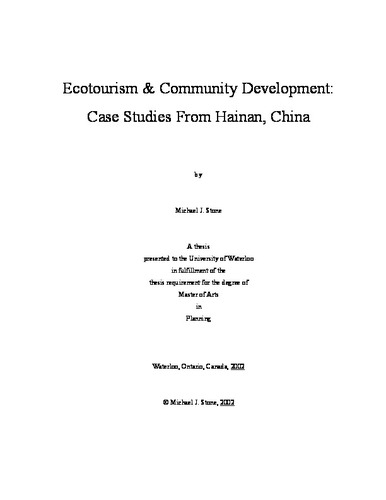 Ecotourism is one of the fastest expanding tourism markets. It has received much attention in developing countries and economically impoverished regions around the world. As an agent of change, ecotourism has been linked to sustainable development strategies and initiatives in many places. However, ecotourism can induce a variety of both positive and negative environmental, cultural and socioeconomic impacts at a destination. Operating in its ideal form (according to some), ecotourism provides the tourist with a quality nature experience, generates funds and support for conservation efforts, has minimal environmental impact and provides socioeconomic benefits to local host communities. While there is evidence that ecotourism's espoused benefits can be realized, there are equally as many, if not more, cases where ecotourism has fallen short of its proposed objectives. Indeed, ecotourism's impact has been highly variable. At the same time, some have criticized that there have been relatively few practical assessments of ecotourism's status at specific destinations. This study sought to assess the current status of ecotourism at two destinations where it is being promoted as a regional development strategy. The existing tourism-park/resource-community relationships and impacts are evaluated at Jianfengling and Diaoluoshan National Forest Parks, in Hainan Province, China. Hainan, although endowed with a wealth of natural resources, is one of China's most economically backward provinces. Ecotourism has been identified as an important provincial strategy for balancing economic growth and conservation. The study is intended to enhance the capacity of ecotourism to generate benefits for both the local communities and destinations (the protected areas), and thus contribute to the sustainable development of the region more generally. Given the exploratory nature of the research, qualitative analysis was used. Interviews, observations and secondary sources were the main vehicles of inquiry employed in this study. Basic quantitative analysis was used to aid in the interpretation of interview results. Triangulation, in terms of both data sources (primary and secondary) and methods (document collection, observations, interviews, quantitative analysis), was used wherever possible to limit personal and methodological biases. Similar results were found in both the Jianfengling and Diaoluoshan case studies. Ecotourism development is at an early stage. As such, socioeconomic benefits for the local communities have been very limited. At the same time, residents have had to cope with reduced access to resources since the Parks were established in the mid-1990s. Nevertheless, community residents generally support conservation and are optimistic that tourism growth will yield benefits. Both Parks receive relatively few tourists, and neither Park charges a user fee. As a result, (eco)tourism has not, to date, contributed revenues towards conservation efforts. Although the Parks offer spectacular tropical scenery, facilities are basic and educational opportunities for tourists are few. Planning direction and recommendations are offered based on the study findings and the salient ecotourism literature. Identified opportunities, constraints and recommendations are used to provide a potential framework for the development of a park (eco)tourism plan at each study site. Results and recommendations could inform planning and management processes, and thus enhance the capacity of ecotourism to generate benefits at the study sites and, more generally, throughout Hainan.